Findings from a comparative analysis of overall survival rates provide evidence to guide management decisions for patients with prostate cancer who are found to have lymph node metastases (LNM) following radical prostatectomy.

The study supports the use of adjuvant androgen deprivation therapy plus external beam radiation therapy (ADT+XRT) for men with one or more high-risk pathologic features that include ≥pT3b disease, Gleason score ≥9, three or more positive nodes, or positive surgical margins and observation alone for men lacking any of those pathologic findings, reported Mohit Gupta, MD, of James Buchanan Brady Urological Institute, The Johns Hopkins University School of Medicine, Baltimore, at the AUA annual meeting.

“Despite the downward stage migration toward clinically localized disease through PSA testing, lymph node metastases are still found in approximately 5% to 10% of men who undergo radical prostatectomy. Current guidelines suggest these men can be offered observation, ADT alone, or ADT+XRT, but the ideal treatment option for patients with LNM is not clearly defined,” said Dr. Gupta, working with Alan Partin, MD, PhD, and colleagues.

“Our study aimed to address this gap. Its findings, which are consistent with a recently published study from three large tertiary centers [Eur Urol Oct. 16, 2017 (Epub ahead of print)], suggest that the majority of patients with adverse pathological findings would benefit from ADT plus XRT. But, we also found that there is a significant proportion of men for whom observation may be appropriate and who could therefore be spared from the morbidity of immediate adjuvant treatment.”

Conducted using the National Cancer Database, the study identified 8,074 patients with LNM following radical prostatectomy performed in the years 2004 to 2013. The majority of patients were managed with observation (55.6%), approximately one-fourth (25.6%) received ADT, and the rest of the men (18.8%) received ADT+XRT. The selection of patients for the analysis excluded men who had received radiation therapy or ADT prior to surgery, those with clinical M1 disease, and anyone with incomplete follow-up data.

Next:What the authors foundCompared with patients managed by observation, men in groups receiving ADT or ADT+XRT had more adverse pathologic features, including higher pathologic Gleason scores, T stages, positive surgical margin rates, and nodal burden. Results of an adjusted multivariable Cox model found that overall survival was significantly improved in men who received ADT+XRT compared to both those who received ADT alone (HR: 0.76, 95% CI: 0.63-0.93; p=.007) and those who were managed with observation (HR: 0.77, 95% CI: 0.64-0.94; p=.008), despite having more pathologically aggressive disease (p<.001). There was no significant difference in overall survival comparing the groups of men who received ADT alone and those managed with observation.

Further analyses stratifying patients by risk features showed receipt of ADT+XRT provided a survival benefit to patients who had at least one of the following significant adverse pathologic features: ≥pT3b disease, Gleason score ≥9, three or more positive nodes, or positive surgical margins. Men without any of those four pathologic features represented almost one-third of the study population, and for that cohort of men, there were no significant differences in overall survival through the use of adjuvant therapy.

Although the study was retrospective, it had a large sample of men representative of the national population.

“The National Cancer Database, which is maintained by the American College of Surgeons and American Cancer Society, captures more than 70% of all new cancer diagnoses across the United States,” said Dr. Gupta.

He added, however, that the database does not allow for a comparison of adjuvant versus salvage therapy, and it does not include information on cause of death.

“Cancer-specific survival would be a more useful metric to evaluate the relative benefit of the different management options,” Dr. Gupta said. 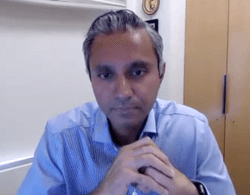 Dr. Balar discusses the background behind phase 2 studies of pembrolizumab in bladder cancer