A retrospective multi-center trial assessed the safety and feasibility of antegrade administration of Jelmyto in patients with low-grade UTUC.

“We found that antegrade administration of Jelmyto via a nephrostomy tube offered a low rate of ureteral stenosis and a favorable safety and tolerability profile overall. This study adds to the evidence that this form of administration is beneficial in many ways, including the ability to treat the elderly without the use of anesthesia, which can have negative cumulative effects when used repetitively,” said study investigator Kyle Rose, MD, urologic oncology fellow at Moffitt Cancer Center in Tampa, Florida, in a news release about the findings.2

The retrospective multi-center trial, published in The British Journal of Urology International, assessed the safety and feasibility of antegrade administration of mitomycin gel in patients with LG UTUC. The primary outcome of safety was assessed using the Common Terminology Criteria for Adverse Events (v5.0). Post-therapy disease burden was assessed through primary disease evaluation (PDE) via ureteroscopy.

For the study, mitomycin gel was administered to 32 patients from 4 tertiary referral centers via percutaneous nephrostomy tube (PCNT). Each patient received at least 1 dose of mitomycin gel via PCNT. Twenty-nine of the patients completed induction, defined as at least 5 of 6 doses, and underwent primary disease evaluation (PDE) at a median 17 weeks after induction.

Findings from a median follow-up of 15 months showed only 3 patients (9%) developed ureteral stenosis. At a median 16 months follow-up, all 3 were treated and no patients had recurrent or chronic stenosis. Seventeen patients (59%) in total had no evidence of disease at PDE and had not recurred at a median 13-month follow-up following induction.

Previously, mitomycin gel had been assessed in the pivotal phase 3 OLYMPUS trial (NCT02793128), which evaluated the safety, tolerability, and tumor ablative effect of the medication in 71 patients with LG UTUC. However, the OLYMPUS study only assessed mitomycin gel in retrograde administration via ureteral catheter, which requires fluoroscopic guidance. Antegrade administration, on the other hand, does not require fluoroscopy once nephrostomy tube placement is confirmed via nephrostogram at the first instillation. 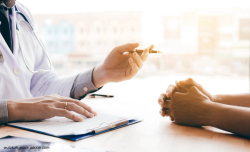