“This is a strong proof of principle that this sort of approach-that is, intravesicular delivery of nanoparticles followed by the application of near-infrared light-is beyond theoretical and can be done at the organism level, which is an important step forward,” said senior author Thomas W. Flaig, MD, of the University of Colorado School of Medicine, Aurora. Results of the study were published in Bladder Cancer (2017; 3:201-10).

Targeting cancers with gold nanorods exposed to near-infrared light is not a new concept. However, applying this concept in a model of superficial bladder cancer is compelling because it avoids some of the potential limitations of the approach in other tumor types.

“Because superficial bladder cancer is directly accessible through routine catheterization, we get around a lot of the issues other groups have had about not being able to deliver their drug to site of disease,” Dr. Flaig said in an interview with Urology Times.

Next: A 'unique opportunity'

“In lung cancer, for example, the treatment is given systemically, so there is a whole different issue of trying to get the nanoparticle to the cancer,” Dr. Flaig explained. “We bypass that because we directly apply it to the bladder. That's the unique opportunity here.”

Specifically, the treatment used in the current study involves gold nanorods linked to an anti-EGFR antibody instilled into the bladder cavity of mice in a xenograft model including T24 human bladder carcinoma cells expressing luciferase to produce bioluminesence. Researchers externally administered near-infrared light using an 808-nm diode laser, and repeated the treatment every week for 4 weeks.

The primary outcome of the study was the assessment of tumor-associated bioluminescent activity over 6 weeks.

At the end of the study, the 16 mice treated with the conjugated gold nanorods plus near-infrared light had a significant (p=.035) reduction in tumor bioluminescence as compared with 14 mice treated with laser alone.

Conjugated gold nanorods alone don’t have an anti-tumor effect, either, as Dr. Flaig and colleagues reported in a previous study (J Biomed Nanotechnol 2014; 10:1267-76) using in vitro models of bladder cancer: “There was some question whether it would induce some sort of effect by itself, but it was really the combination [of nanoparticle and laser],” Dr. Flaig said.

The treatment was well tolerated, according to investigators, and was applied without causing substantial injury to the normal urothelium at the recommended laser power density of 2.1 W/cm2 for 30 seconds.

Although the work is in an early stage, Dr. Flaig and colleagues believe the technique holds potential promise as a treatment for human bladder tumors, using a slightly different tack, since without the limitation of the tiny mouse bladder, a cystoscope could be used to deliver the near-infrared light and induce thermal ablation.

“I think this work strongly supports that contention that this approach has clinical translational potential,” Dr. Flaig said. 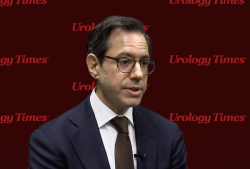