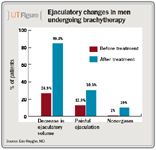 "Active surveillance, brachytherapy, external beam radiation, and radical prostatectomy are all appropriate for localized, low-risk prostate cancer, according to current guidelines. But we do not have clear data on how these therapies affect ejaculation and orgasm," said Eric Huyghe, MD, an oncologist at Universite Paul Sabatier, Toulouse, France. "These elements of male sexual functioning are not very well studied."

Dr. Huyghe presented one of the first detailed analyses of ejaculation and orgasm following permanent 125 I brachytherapy at the AUA annual meeting in San Francisco. Researchers at Universite Paul Sabatier mailed a sexual function survey to a series of 270 sexually active men treated with brachytherapy at a local cancer center. Of the initial group, 241 men (89%) agreed to participate in the mail survey covering five ejaculatory domains: frequency, volume, dry ejaculation, pleasure (orgasm), and pain. The questionnaire was based on the standard Male Sexual Health Questionnaire (MSHQ).

While the majority of men in the study continued to ejaculate following brachytherapy, 84.9% reported a decrease in ejaculatory volume compared to 26.9% before brachytherapy (p<.001), Dr. Huyghe said. Among men who completed the survey, 18.7% reported dry ejaculation following implantation.

"These results are important, because weak orgasm or painful ejaculation can contribute to a deterioration of satisfactory relationships following implantation," Dr. Huyghe noted.

"Often, these symptoms develop early and progress over time."