Colpocleisis is a safe, minimally invasive procedure for treating pelvic organ prolapse in older women, according to the findings of a retrospective study reported by female pelvic medicine surgeons from Loyola University Medical Center, Maywood, IL.

The researchers investigated the morbidity and mortality of the procedure using data from the University HealthSystem Consortium (UHC) database. Based on ICD-9 coding, they identified 1,973 women who underwent a LeFort colpocleisis during the 4-year study period (2008 to 2012). The procedures were performed at 139 of the more than 350 academic and affiliated hospitals included in the nationwide UHC alliance.

There were three deaths (0.15%) in the series, average length of stay was 3.1 days, the intensive care unit admission rate was 5.4%, and 1% of women were readmitted into the hospital within 30 days, reported first author Margaret Mueller, MD, fellow in female pelvic medicine and reconstructive surgery at Loyola. 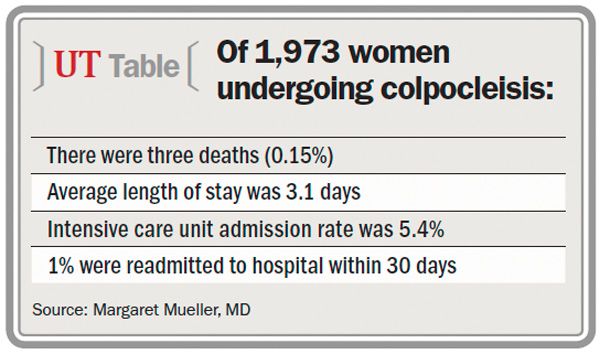 “Given our aging population, it is likely that a larger proportion of women will be presenting for urogynecologic procedures later in life. These older women present a unique challenge as they have more comorbidities compared to their younger counterparts, and in fact, it has been reported that women older than 80 years of age presenting for surgical management of prolapse have almost a 14-fold increased mortality risk compared to their younger counterparts,” Dr. Mueller said.

“Colpocleisis is an effective surgical treatment for pelvic organ prolapse in women who are no longer sexually active, as shown by a recent single-center retrospective study that reported an anatomic success rate of 98% in a series of over 300 women. Our study has limitations given its retrospective nature, dependence on coding, and the lack of information on long-term outcomes. However, the low complication rate, morbidity, and readmission rate make this procedure an attractive option to women with comorbidities.”

Most procedures done in low-volume centers

Analyses were also conducted to investigate whether any of the perioperative outcomes varied by patient age (<40, 40-59, 60-79, and >80 years), geographic region (Pacific, West, Midwest, East, and Northeast), and center case volume (low, 1-40; medium, 41-80; high, >80). When the women were grouped by those variables, it was seen that most patients were older; all geographic regions were equally represented, although there were no cases from the Pacific; and the majority of procedures were performed at low-volume centers.

“Interestingly, only three (2.2%) of the 139 centers met our definition for a high-volume center, and we think that is because colpocleisis is underutilized,” Dr. Mueller said.

The analyses showed trends for ICU admission rates, complication rates, and length of stay to be lower at higher volume centers, although the associations were not statistically significant. The only significant difference found was a higher rate of ICU admission among younger versus older women.

“The possible explanation for this finding is unclear because information on indications for colpocleisis and secondary diagnoses were unknown,” said Dr. Mueller.

“We are postulating that the younger women may have had serious medical comorbidities that precluded them from undergoing other reconstructive procedures for prolapse, and these comorbidities led to their higher ICU admission rate.”UT

Subscribe to Urology Timesto get monthly news from the leading news source for urologists.