Common misconceptions about enlarged prostates by patients and physicians

Benign prostatic hyperplasia (BPH), or prostate gland enlargement, is a condition that is often stigmatized by patients and non-urologists in terms of who is diagnosed, what the diagnosis means, and managing the diagnosis.

In a recent interview, Kevin T. McVary, MD, FACS, suggested that more physicians should take the time to educate their themselves and their patients on this condition. Specifically, he references new minimally invasive technologies and non-invasive management options for this population. McVary is a professor of urology at the Stritch School of Medicine and director of the Center for Male Health at the Loyola University Medical Center in Maywood, Illinois.

What are some stigmas associated with enlarged prostates from the physician perspective? From the patient perspective?

This is an excellent question because there are misconceptions in both groups, both patients and physicians. Let's start with the patient misconceptions. In terms of enlarged prostates, the idea is that enlarged prostates—so-called BPH—promotes lower urinary tract symptoms, urination difficulties, things like frequency, urgency, getting up in the middle of night, that type of thing. An important misconception on the patients’ side is that this is an issue of old, frail men. When this starts to happen to them, they wonder if this is an “end-of-life” sign. That is inaccurate. Men can start to develop urination troubles due to enlarged prostate beginning in their mid 40s. If it occurs earlier than that, it involves a lot of extra work to be sure that there isn't something else going on. But in the mid to late 40s is when men begin to experience some of these changes. Many of these changes may remain very modest over time. In other men, because of genetics, family background, perhaps lifestyle, this can worsen rather rapidly. So, it is common. This happens to old, frail men, but you don't have to be that in order for these things to start develop[ing]. Even though there [are] many therapies that one can do, it's not a sign of anything ominous for most men. And when I say “most,” I mean the vast majority. I don't want to say it is inevitable, [but] it is certainly common. And in many cases, there's prompt and good treatments. In other men, it's understanding that this is occurring, and if they can cope with the symptoms and signs of this and it's not otherwise affecting their health, they don't necessarily have to receive a treatment. They can be observed and followed and monitored.

In terms of physicians' misconceptions, and I would say primarily non-urologists’ misconception, is that lower urinary tract symptoms from BPH is unavoidable and it is something that is treated with hazard. What do I mean? Well, they do occur with age, that's true. Although, again, many men who have the symptoms don't require a treatment. You need to assess them to be sure that it is not otherwise affecting their health in the sense that they can live with their symptoms, and their symptoms aren't a sign of a more serious underlying medical problem. If they can live with it, so can the physician. They can be, again, observed [such as through] active surveillance [or] watchful waiting.

The other issue with physician misconception is that the treatments are hazardous, that our interventions are significant and pose significant risk to patients. This is decidedly not true. What am I referring to? Many non-urologists might think that the only option available for men are things like the [transurethral resection of the prostate], which is an effective treatment for prostate symptoms, but the field has evolved, where we have several minimally invasive therapies that do not require hospitalizations, that do not require inpatient surgery, and that can be treated very efficiently and safely in the office setting. Really, patients can come in, have an appropriate office-based procedure for their BPH, and drive themselves home. And after a period of recovery, [they can] have an excellent response in terms of symptoms with a minimum risk on sexual function. So, that's probably another misconception of non-urologists, maybe even some urologists—that BPH treatments impacts sexual function. [It] is true that some do, but the newer minimally invasive therapies are much less likely, and in some cases unlikely, to have any impact on sexual function at all. By that, I mean no impact on erection and no impact on ejaculation, another aspect of sexual function that has probably been underplayed.

How do these stigmas surrounding enlarged prostates affect management of patients with prostate cancer or other prostate-related diseases?

One thing, which is very common, is [that] men equate the urination symptoms of BPH with cancer. So, there can be many sleepless nights where they are worried that they're getting up at night now, and that this is a sign of prostate cancer or bladder cancer. This is decidedly not the case. It's actually unusual that a man with prostate cancer would present with these urinary symptoms. I mean, it is possible, but it's highly unlikely. And so, there's a bit of reassurance that has to occur to patients to reassure them that this is unlikely to be a malignancy. [It's] very common. I think that fear, in some men, leads to panic and perhaps overreaction. [In] other men, it may keep them at home, sleepless at night, and destroy the quality of their life because they're thinking, "Oh, boy, this is going to be the big one." So, I think that has a decided effect on presentation. The other [aspect] really dovetails in with what I spoke about before: "These invasive treatments are going to ruin the quality of my life. They're going to ruin my sex life and make me dependent on pads or catheters." Again, that is unlikely to be the case. These are newer [minimally invasive] therapies. If used appropriately, and that is a doable thing for a skilled urologist, this can maintain or, in some cases, improve not just their urination and quality of life, but also their sexual function. So, that requires an accurate diagnosis, a global assessment of their urination health, their prostate health, and we can discern these issues out with very good accuracy. It's a very rewarding place to be [as] a treating physician right now in terms of addressing some of these BPH issues.

What is the urologist’s role in destigmatizing enlarged prostates?

Having the prostate enlarged, again, does not mean that it's bad for you. I mean, you can have this and be totally [okay]. I'll give you an example. You're an older guy, you're starting to get up at night. You go with some urinary frequency, but your life is such that if you get up a couple of times at night, you sleep in a little bit in the morning and you wake up refreshed. You don't need treatment. If you're otherwise doing okay, if your bladder is getting reasonably empty, and there's no impact on a renal function—and the urologist could discern all this—the urologist can live with you living with that. That requires an assessment and an accurate diagnosis, so you would do a symptom assessment, [or] a quantitative measure of symptoms. You would do some prostate health maneuvers, perhaps a [prostate-specific antigen test], certainly examine the urine, looking for things that might mimic BPH lower urinary tract symptoms. [For example,] a man whose diabetes is out of whack will [have] a lot of urination symptoms. The prostate has an nothing to do with that; his diabetes has to get in better control. So, urologists [are] very skilled at kind of discerning out these issues and getting down to why men are having the complaint. At that point, once you know all this, then it's pretty straightforward in terms of offering men a series of options. You could do it serially, like, try pills, try interventions, perhaps try more significant surgeries. Or men can say, "I'm not a pill taker. I'd like to explore a minimally invasive option right away." That's also completely and totally appropriate. So, you line this up and help patients educate their way through it once you have an accurate diagnosis.

I think there's [3] other things. One is that sometimes other physicians will say, "Well, it's only BPH. Live with it, grandpa." I see this, and non-urologists need to understand [the situation] from the patient's perspective, which is really the place where we [as] physicians sometimes falter. From the patient's chair, he looks at some sequelae of BPH urination symptoms equivalent to having a stroke or a heart attack. Now, it's not often life threatening, like one of those diagnoses, but from the patient's chair, in terms of the severity in his life, he equates those. A heart attack is the same as a stroke, which is the same as going into urinary retention. So, it's not a little thing to patients. Sometimes physicians underestimate the impact of these problems on their patients.

And the other [thing], I think, is something we're starting to come to grips with: What can patients do to either improve or prevent? It's pretty straightforward. It's a very consistent picture that there are lifestyle risks, which worsen or contribute to the development of BPH. By that I mean, diet and lifestyle, weight control, and exercise. Just like with heart disease, prostate [and] bladder health [have] a very strong influence from a patient's diet and lifestyle. What's the message? Well, very conveniently, a bladder and prostate-healthy diet is the same as a heart-healthy diet, and a heart-healthy lifestyle. That means lower caloric load [and] that means fight obesity. Try to prevent obesity. And I would say, more vegetables, less meat, and if it is meat, less red meat, more fish [and] chicken type of thing. So, the same thing we've been hearing for probably 2 decades about heart disease. [By] lifestyle I mean exercise. I don't mean Olympic-type exercises. It's moderate exercise. It's 10 or 20 minutes a day, or at least several times a week. It's losing weight; 10 pounds can make a big difference, not just in your heart health, but also in your urination qualities. Patients will report that all the time.

The other thing is [that] there are many non-invasive or minimally invasive treatments, which can be useful to patients, and they need to understand that. The word's getting out, but patients need to hear that more and they need to talk to [a] urologist who is up on this minimally invasive game to hear about that. And the other thing is that it turns out that family history is a strong predictor. So, if Dad and Grandpa both had urination problems, it might be very well that you are at risk for urination problems, and so maybe the dietary issues and the lifestyle issues need to be emphasized 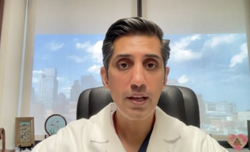