Adherence to current guidelines for genetic testing in men with prostate cancer would miss a sizable proportion of patients with pathogenic germline variants, according to a study presented at the American Society of Clinical Oncology annual meeting in Chicago.

Chicago-Adherence to current guidelines for genetic testing in men with prostate cancer would miss a sizable proportion of patients with pathogenic germline variants, according to a study presented at the American Society of Clinical Oncology annual meeting in Chicago.

The investigation analyzed data from an unselected population of 1,158 men with prostate cancer who had germline genetic testing performed at a commercial laboratory (Invitae) between 2013 and 2016. The number of genes tested ranged from one to 142, varied in each patient according to the requisition submitted by his physician, and often included 14 genes on the commercial laboratory’s prostate cancer-targeted panel.

One or more high-risk variants, as defined by “Sherloc,” a refined classification system based on American College of Medical Genetics criteria (Genet Med [epub ahead of print] May 11, 2017), was found in 199 men (17.2%). Seventy-three of the men (37%), however, would not have qualified for genetic testing based on the existing National Comprehensive Cancer Network guidelines. In the study, a germline variant was found in 15.4% of patients with a Gleason score ≥7 and in 12.4% of men whose Gleason score was ≤6.

Oliver Sartor, MD, Laborde Professor of Cancer Research at Tulane School of Medicine, New Orleans, initiated the trial. He told Urology Times, “The take-home message from this study is that the guidelines for genetic testing in men with prostate cancer have to change so that we can better serve these patients and their families with greater access to genetic testing and therapeutic options.”

Heather H. Cheng, MD, PhD, assistant professor of medical oncology, University of Washington, Seattle, reviewed the study during a discussion session at the meeting. She commented, “This is a well-annotated large series. Although there is some selection bias inherent to the group of men and we have uncertainty about the relevance of some of the genes, I think it is clear that new guidelines are needed because the existing ones miss men who are germline mutation carriers.

“We need to remember we have continued responsibility to obtain a complete family history, and we need to consider offering genetic services to men with metastatic prostate cancer and potentially those with high-risk localized disease,” Dr. Cheng said.

“BRCA1 and 2 are the genes that are best recognized for their association with risk for prostate, breast, and ovarian cancer, and BRCA2 has been associated with more aggressive prostate cancer. Testing for those two genes alone, however, would miss a large proportion of men with germline variants,” said co-author Piper Nicolosi, PhD, a clinical genomic scientist at Invitae.

“Therefore, the findings in this study demonstrate the benefit of testing with a disease-specific panel to best inform men with prostate cancer about their genetic risk and potential risk to their immediate family members.”

Discussing the management implications of genetic testing in men with prostate cancer, Dr. Sartor said there are ramifications for both treatment and screening. First, the PD-1 inhibitor pembrolizumab (Keytruda) was recently approved for treatment of patients with mismatch repair deficient solid tumors. In addition, information on germline variants could guide patient selection for participation in targeted treatment clinical trials. For example, there is evidence that men with BRCA2 mutations may in particular respond to PARP inhibition.

Identifying any positive and/or actionable variants in BRCA, PALB2, CHEK2, MLH1, MSH2, MSH6, and PMS2 will be important not only for the patient’s treatment, but for their at-risk relatives who can benefit from screening.

Dr. Sartor had no financial interest in Invitae when the study was initiated and the data analyzed. Since then, he has received research funding. He also is a consultant/adviser for AstraZeneca, Bayer, Endocyte, Janssen, and Sanofi, and his institution has received funding from Bayer, Dendreon, Endocyte, Janssen, Lilly, and Sanofi. Several of his co-authors are employees of and/or have stock and other ownership interests and/or have received travel/accomodations/expenses from Invitae. 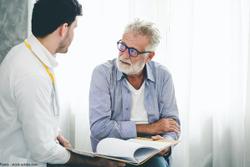 How PSMA PET will change the treatment of prostate cancer

Evolution of Care of mCSPC