Men with moderate to severe lower urinary tract symptoms who were treated with botulinum toxin A injection found their symptoms markedly improved.

For the responders, the duration of response appears to be at least 1 year, said senior author Kevin T. McVary, MD, professor of urology at Northwestern University, Chicago.

In the MIST2 (Minimally Invasive Surgical Treatments) trial, sponsored by the National Institutes of Health, 134 men age 50 years and older with voided volume of at least 125 mL, a maximum urinary flow less than 15 mL/sec, and an AUA symptom score severity of 8 or greater were randomized to receive either 100 U or 300 U of botulinum toxin injected trans-rectally into the transition-peripheral zone interface of the prostate. 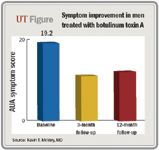 These investigators injected the prostate transurethrally.

Three and 12 months were selected as time points a priori to gauge the effect of botulinum toxin injection on symptoms, he said.

The best responders to intraprostatic injection of botulinum toxin were men with low baseline levels of PSA and total prostate volume.

Surprisingly, there was no evidence of neurotrophism in this study, said Dr. McVary.

"What it means is that this is affecting symptoms and signs of BPH, but not by shrinkage of the gland," he said. In addition to ultrasound measurements, further evidence that prostate size was not affected is maintenance of PSA levels throughout the study.

Injections were tolerated well, he said. The side effects were documented urinary tract infection without sepsis in four patients; pelvic pain that resolved in one patient; urinary retention in three instances, one of which did not resolve and required ongoing catheterization; gross hematuria, reported 14 times; and hematospermia in six patients. There were no serious side effects.

About 25% to 30% of the men were nonresponders; however, Dr. McVary noted, "If you're a responder, it looked like you maintained the response."

The duration of the response is uncertain.

"It's likely going to wear off," Dr. McVary said.

A number of men requested repeat injections beyond the final follow-up of the trial at 12 months, preferring the treatment to oral medication, he indicated.

A placebo-controlled trial (using a sham injection) involving approximately 300 men is being organized, he said.