Nocturnal polyuria: Use these tools to make Dx

"You should do a 24-hour voiding diary in addition to medication history and examination in order to diagnose polyuria," Jeffrey P. Weiss, MD, of State University (SUNY) Downstate in Brooklyn, NY, told Urology Times.The study was presented by Harjot Singh of SUNY Downstate at the AUA annual meeting in San Francisco.

To measure the importance of previously identified risk factors for nocturnal polyuria, Dr. Weiss, Singh, and their colleagues retrospectively analyzed data on 524 patients who had completed a 24-hour flow volume chart during an evaluation of lower urinary tract symptoms.

In this population, some risk factors were overrepresented compared to the general population, including OAB and BPH, while others were underrepresented, including urinary incontinence, urethral obstruction, prostate cancer, and hypertension.

The authors found no statistically significant differences in risk factors between the two groups. They were particularly surprised to find that established risk factors such as sleep apnea and pedal edema did not correlate to nocturnal polyuria, they said. They speculated that this was due to the small sample size.

Of the other classes of medications, diuretics came closest to a statistically significant difference, with 51% used by those with nocturnal polyuria compared to 49% of those without the condition (p=.065).

Using binomial logistic regression to see which other factors might be independently associated with nocturnal polyuria, the authors found three that were statistically significant:

Read: Ablation of the trigone shows efficacy, safety for OAB

The authors called for larger studies with more representative study populations. In the meantime, their findings underscored the importance of a 24-hour frequency volume chart as the gold standard for diagnosing nocturnal polyuria, Dr. Weiss said.

"Voiding diaries are good medicine, and as far as I know, nobody ever died of doing a voiding diary," said Dr. Weiss. "Why don't doctors tell their patients to do diaries more often? Because it's time consuming for the doctor and patient. It takes time to explain how to do the voiding diaries."

But the effort is worthwhile, because it can help distinguish patients with polyuria from those with nocturnal polyuria, he said. That's important because polyuria can be an indication of serious underlying conditions, such as untreated diabetes mellitus, he pointed out. 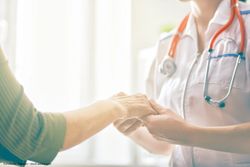