An investigatory bladder cancer agent was associated with a 12-month high-grade recurrence-free survival of 35% for patients with Ta/T1 disease, researchers reported.

There may be a new option, besides radical cystectomy, for patients with high-risk nonmuscle-invasive bladder cancer whose disease is unresponsive to Bacillus Calmette-Guérin (BCG) treatment, according to a phase II study presented at the Genitourinary Cancers Symposium in Orlando, FL.

Researchers found that a replication deficient recombinant adenovirus gene transfer vector, rAd-IFNα/Syn3 (Instiladrin), was associated with a 12-month high-grade recurrence-free survival of 35% for patients with Ta/T1 disease, and was well tolerated.

“I think the single most important finding from the study is that 35% of patients [on rAd-IFNα/Syn3] were free of high-grade recurrence at one year,” lead author Stephen A. Boorjian, MD, of Mayo Clinic, Rochester, MN told Urology Times. “It means this agent has the suggestion of impacting the natural history of this disease, following BCG. The dosing schedule is favorable. It’s basically one dose every 3 months. And the safety profile was quite good.”

In the open-label, multicenter U.S. trial, the authors studied 40 patients with high-grade BCG refractory or relapsed non-muscle invasive bladder cancer, who were randomized to receive either intravesical rAd-IFNα/Syn3 at 1x1011 or 3x1011 viral particles/mL, according to the study abstract. Subjects who responded at 3, 6, and 9 months were re-treated at 4, 7, and 10 months. Among those studied, 21 patients had carcinoma in situ, nine had carcinoma in situ and Ta/T1 disease, and 10 had only Ta/T1, or non-muscle invasive, disease.

Next: Of the 40 patients who responded to therapy, 14 remained free of high-grade tumor recurrence a year after treatment began

Of the 40 patients who responded to therapy, 14 remained free of high-grade tumor recurrence a year after treatment began, with similar findings in both dosage arms, as well as between those with refractory and relapsed non-muscle invasive bladder cancer.

Twelve-month recurrence-free survival for patients with papillary (Ta/T1) only disease was 50%.

The most common adverse events were micturition urgency, dysuria and pollakiuria, fatigue, and nocturia.

“There is now an open and enrolling phase III clinical trial of this agent that is being done nationally, across multiple centers in the U.S.,” Dr. Boorjian said. “If these results are maintained in the phase III study, this therapy has the potential to represent a significant advance for patients as an option to treat high-grade non-muscle invasive disease after BCG. Right now, the alternative is radical cystectomy, which does carry with it morbidity. So, this is an option for patients, who are often elderly, with other comorbidities, to avoid having to undergo cystectomy.”

“In this phase II trial, we saw excellent tolerability and, more importantly, very significant efficacy of a novel intravesical therapy with a unique mechanism of action, which achieved a 35% complete response rate at 1 year in a previously BCG treated, high-risk bladder cancer population,” said Dr. Shore, of Carolina Urologic Research Center, Myrtle Beach, SC. “We look forward to the phase III trial, which will hopefully confirm the results in the presentation by Dr. Boorjian and, thus, lead to a significant therapeutic advance for BCG unresponsive disease.”

Dr. Boorjian has consulting and advisory roles with Astellas Pharma and Medivation. Dr. Shore has consulting or advisory roles with Astellas, Bayer, Dendreon, Ferring, Janssen, Medivation, Sanofi, and Tolmar. Several of their co-authors have a financial or other relationship with pharmaceutical companies. In addition, several of their co-authors’ institutions have received research funding from Bristol-Myers Squibb and/or other pharmaceutical companies. 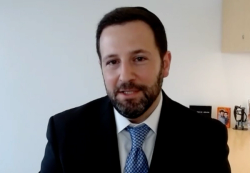