Washington--Months of intensive lobbying and hard work have paid off for urologists, who now have an outside shot at a net Medicare fee schedule increase for their services, compared with the overall 4.3% reduction for 2006 announced in March.

Astoundingly, the Centers for Medicare & Medicaid Services has accepted new practice expense survey data provided by AUA, resulting in proposed fee schedule revisions that could actually mean an average 1.8% increase in urology payments. According to AUA, if CMS implements its projected 4.3% cut in the fee schedule conversion factor, the improvements would soften that blow to a 2.6% reduction for urology.

In February, William F. Gee, MD, former AUA health policy chair, urged Congress to remove inequities from the SGR formula, warning that failure to do so would result in reductions of roughly 5% each year from 2006 to 2012, with rates not returning to their 2002 level until well after 2013.

"In other words, physicians will receive less reimbursement in 2013 than they did in 2002 for the exact same procedure, regardless of inflation and increased practice costs," Dr. Gee told the House Ways and Means Health Subcommittee in testimony on Feb. 10, 2005.

Dr. Gee pointed out that the 1.5% increase was mandated by Congress for 2004 and 2005 to account for problems with the SGR, but added that Congress failed to act on the underlying problems in the formula.

A representative of the Alliance of Specialty Medicine, to which AUA belongs, Dr. Gee said problems stem from the government including the costs of Medicare-covered outpatient drugs and biologicals in setting the expenditure target for physicians' services, although these items are not actually included in physicians' services. Including them, he said, leads to decreases in the annual payment update.

"The legislation, the Medicare Value-Based Purchasing for Physicians' Services Act of 2005, will provide real reform to the way physicians are paid for their services in Medicare and [will] give urologists the opportunity to receive the compensation they deserve for their high quality of service," an AUA memo urging members' support declares.

In addition to providing for the 1.5% increase for physicians in 2006, beginning in 2007, the bill will eliminate the SGR formula, AUA explained. AUA said that if physicians submit quality and efficiency (Q&E) data to CMS, payment will be based on the MEI. Physicians who do not report data would receive 1% less.

Under the bill, Q&E data would include a mixture of outcome, process, and structural measures. They would be "evidence-based," AUA said, and "would be consistent, validated, practicable, and not overly burdensome to collect." 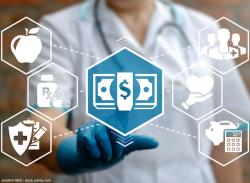