“The robotic approach is an option in these patients and in my opinion, it is a preferred option. Some early observations held that robotic procedures should be restricted to favorable-risk patients. I think the robot may offer greater advantages to higher risk patients than to lower risk patients,” senior author Joseph A. Smith, Jr., MD, professor and chairman of urologic surgery at Vanderbilt University, told Urology Times.

This is not necessarily an endorsement of a universal robotic approach to prostatectomy, he added.

“I have a large experience with both procedures and contend that the surgeon and his or her experience are more important than the surgical approach,” Dr. Smith said.

Dr. Smith, who estimates he has conducted more than 2,500 open prostatectomies and more than 4,000 robotic procedures, rested his opinion on a retrospective review of 1,286 intermediate- and high-risk patients drawn from among 3,781 men who underwent prostatectomies at Vanderbilt Medical Center between 2003 and 2009. The patients were diagnosed with cT2b cancer or higher, Gleason sum ≥7, or preoperative PSA ≥10.0 ng/mL. Those who received neoadjuvant therapy, had less than 6 months follow-up, or had insufficient clinicopathologic data were excluded. Some 631 men met the study’s criteria. 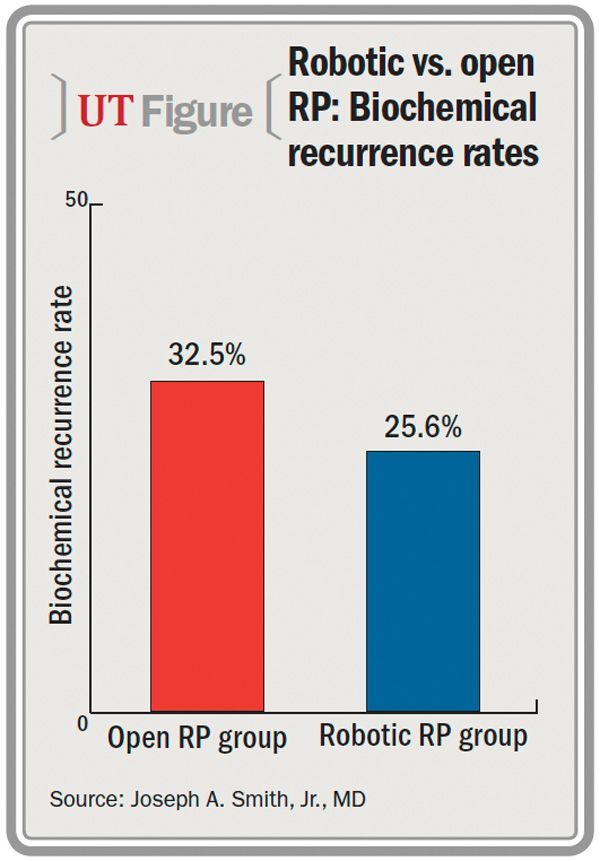 Although the retrospective study did not definitively demonstrate which procedure might attain superior results in these patients, Dr. Smith said that robot-assisted procedures were becoming increasingly prevalent.

“The robot offers some clearly proven advantages. I think that everyone, early in their career, myself included, thought that we should restrict the robot to patients with favorable characteristics. The reasoning was that the open procedure allowed us to go widely around the prostate and perform better lymph node dissection in high-risk patients,” said Dr. Smith.

“My thinking has reversed, and now it is my opinion that if the intent is to perform a wide resection of the prostate, it can be done better with a robot. However, this study does not prove that definitively.”

Dr. Smith added that he remained convinced that the robotic procedure was as effective, if not more so, than the open procedure.

“The reason for my belief is this: The robotic approach is antegrade. The first step is to widely separate the rectum from the prostate and mobilize it completely posterior to Denonvilliers’ fascia. In doing so, we can more widely resect the prostatic pedicle and lateral prostate tissue. I do not think the robot is inferior in high-risk cases. In fact, I think it is superior in its ability to permit wide resection,” he said.