This article examines current developments in robotic urologic surgery and future directions, including the introduction of alternative surgical robots.

Minimally invasive surgery in urology has come a long way since the initial report of laparoscopic nephrectomy in 1992. The days of scrutiny are long gone, and the robotic platform has further cemented minimally invasive surgery as the centerpiece of urologic oncologic surgery. Equivalence to open surgery has been demonstrated in every major urologic oncologic surgery.

Thanks to the technical benefits of the robotic system, utilization of minimally invasive techniques has increased over the last decade. The robotic approach has become the standard approach in performing radical prostatectomy and partial nephrectomy for small renal tumors in the United States. Even technically challenging procedures such as radical cystectomy and intracorporeal urinary diversion have been standardized in experienced centers.

This article examines current developments in robotic urologic surgery and future directions, including the introduction of alternative surgical robots.

Even though the new model addressed some of these logistic and ergonomic issues, there remain purported limitations of the current platform. One such example is the lack of tactile feedback, which is a cornerstone for those trained in open and standard laparoscopy. Addition of this technology may facilitate a shorter learning curve and wider adoption among other specialties. The learning curve involved with mastering robotic surgery remains steep, requiring dedicated time and mentorship that take time away from a surgeon’s busy practice.

Next: The next frontier in robotics

The next frontier in robotics

In complex reconstruction cases, identification of key anatomic structures remains paramount for a successful outcome. For example, identification of the ureter can be very difficult in re-do surgery or in cases of retroperitoneal fibrosis. Re-do ureteral procedures such as pyeloplasty, recurrent stricture, reimplantation including Boari flap, uretero-enteric strictures, and ureteral reimplantation of transplanted kidneys are facilitated by technology offered by robotics. 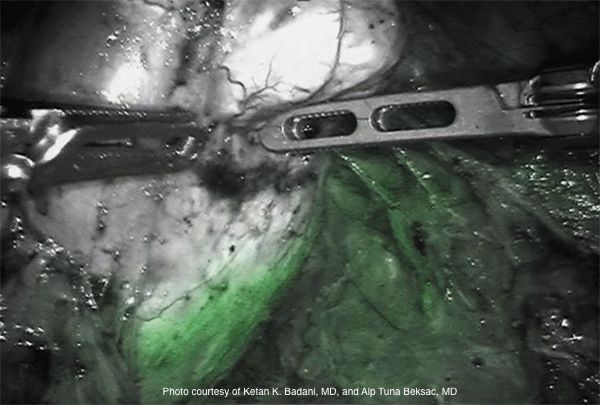 Figure 1. Near infra-red image of a kidney under warm ischemia. Gray indicates the non-perfused portion of the kidney, whereas the green section is perfused by a polar artery. Indocyanine green (ICG) is administered intravenously.

Indocyanine green (ICG) has been approved for intravenous administration to identify vascular perfusion. This has become popular in renal surgery, as well as bowel work during urinary reconstruction (figure 1). A novel and highly useful application of this technology is direct “intra-luminal” infusion through an access point (eg, percutaneous nephrostomy tube, Foley catheter, etc). These immunofluorescence techniques have made a meaningful impact on very complex re-do reconstructive procedures that are increasingly being performed robotically (figures 2 and 3). 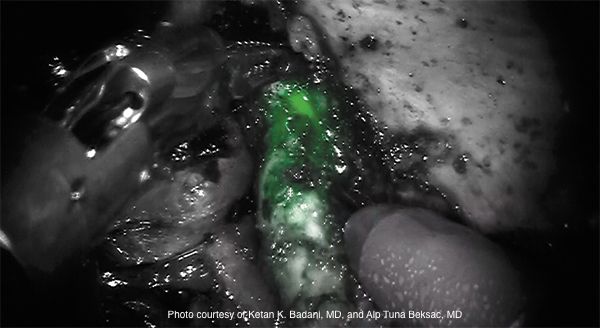 Figure 2. Near infra-red image of a ureter in a patient with retroperitoneal fibrosis. Indocyanine green has been administered through a nephrostomy tube.

The addition of intraoperative robot-controlled Doppler ultrasound has also facilitated highly complex partial nephrectomy operations. Doppler ultrasound allows the delineation of renal masses and helps mark the edges of the tumor while defining intra-renal vascular anatomy for preservation of native kidney function. Accurate use of this tool helps dissect the tumor with minimal parenchymal loss. Given the evidence from contemporary studies, preserving functional parenchymal volume is key in preserving kidney function. 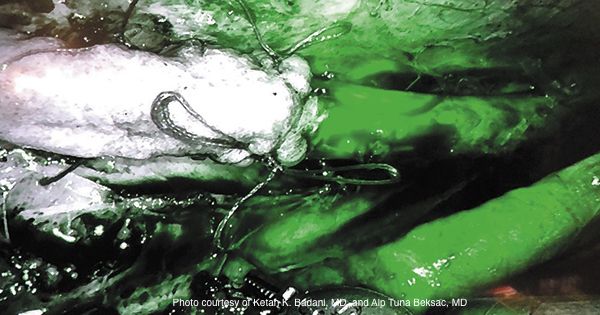 Figure 3B. ICG is administered intravenously. Buccal mucosa flap is gray, whereas ureter is green.

The latest reports show the use of radical nephrectomy in treating extremely challenging cases such as inferior vena cava (IVC) thrombectomy. Experienced centers have started to publish IVC thrombectomy series of up to a level III thrombus. Level III thrombus will extend beyond the hepatic bifurcation, making it one of the most challenging cases in urologic surgery (J Urol 2015; 194:929-38). Considering the magnitude of the incision for open management of these procedures, robotic surgery offers significantly reduced morbidity. Overall, technological improvements address the gap in the management of these complex cases.

Next: Cost issues and other robotic platforms

Cost issues and other robotic platforms

Furthermore, installations of the da Vinci system increased by 21% in 2016. Despite the increased cost, why is the use of robotics increasing? There are multiple explanations. The demand for automation and minimally invasive surgery in multiple specialties is growing. Robotic surgery has not been used only for highly complex surgery, but also allows surgeons with limited laparoscopic skills to perform minimally invasive surgeries. Overall, robotic surgery is not a passing trend but is here to stay. Therefore, it is a necessary skill set for every operating urologist.

A report by Allied Market Research indicates that the surgical robotic market is expected to grow by 6% per year until 2020, which would make it a $28.8 billion industry (www.alliedmarketresearch.com/surgical-robotics-market). As some of the key patents of Intuitive Surgical expire in 2019, we are likely to see newer robotic models earn FDA approval and enter the market in the very near future. Overall, there will be competition in the market and prices will likely drop.

Some of the most promising efforts to develop alternative surgical robots worldwide are outlined here.

Meere Co. of South Korea has developed a robot in collaboration with Yonsei University. The company has published trials in animals and has recently received approval for human use in Asia.

Medtronic Inc. has been silent about the design of its robot but is planning to initiate clinical trials in India before launching its product in the U.S.

Avateramedical of Germany registered patents for its Avatera robot in 2012 and 2013. The company’s validation process for CE certification was initiated in 2017.

Medicaroid, a Japanese firm, introduced its surgical robot in 2016. Japanese license is expected in 2020.

Verb Surgical is the joint venture of Google Inc. and Johnson & Johnson to develop a surgical robot. Details of the companies’ system have not yet been revealed. The power of Google behind a medical device seems very intriguing, and hopefully with allow for machine learning and electronic medical record integration.

Next: Near future not too far away

Near future not too far away

As exciting as the newer platforms sound, it will be some time before we see competitors in the commercial market. Regardless, the prevalence of robotic platforms will increase in smaller communities and other countries. Contemporary literature has demonstrated that the use of partial nephrectomy has increased and open radical nephrectomy decreased since the adoption of the robot. This trend will continue not only in kidney cancer but also in other subspecialties.

Robots and surgeons will continue to evolve. In referral centers, we will likely see more and more difficult procedures performed robotically as experience continues to grow. In addition to the now standardized oncologic surgeries, we will see more complex reconstructions and vascular surgeries (including IVC thrombectomy and kidney transplantation) performed with a robot.

The future of robotics in urology remains bright, with new platforms and technology on the near horizon. The robot battle is set to begin.

Dr. Hotaling is assistant professor of surgery (urology) at the Center for Reconstructive Urology and Men's Health, University of Utah, Salt Lake City, and Dr. Kaplan is professor of urology, Icahn School of Medicine at Mount Sinai, New York.