BPH and lower urinary tract symptoms are very common, increase as a function of age, and are often managed through watchful waiting.

Chicago-BPH and lower urinary tract symptoms are very common, increase as a function of age, and are often managed through watchful waiting, according to the results of an analysis presented at the AUA annual meeting.

Among the key findings of the study was that up to two-thirds of the incidence of the disease goes untreated, defined in the study as men who were diagnosed but did not receive prescriptions for BPH/LUTS medications. 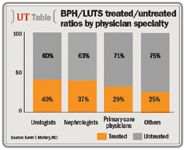 Dr. McVary's group used a dataset with medical and pharmacy information from 90 U.S. health care plans. Specifically, they focused on administrative claims data from October 2006 through September 2007. Patients were at least 45 years old with one or more appropriate diagnostic codes.

Medications used by men in the study included alpha-antagonists, 5-alpha-reductase inhibitors, and anticholinergics. Alpha-antagonists were the most commonly used drugs, taken by 84% of the men.

It was also observed that patients with a higher number of medical comorbidities were significantly more likely to be treated than those with fewer comorbidities (p<.001).

The researchers found that watchful waiting is often recommended by clinicians as an acceptable means of dealing with BPH/LUTS, prompting Dr. McVary to comment, "If the problem isn't prostate cancer, watchful waiting can be an effective way to help patients cope with symptoms."

Dr. McVary serves as an investigator/consultant for GlaxoSmithKline, sanofi-aventis, and Astellas.

TOOLS
Educate your patients on BPH with this free handout at: http://www.urologytimes.com/BPHhandout

COMMUNITY
Use of intraprostatic injections to treat BPH is not a new idea, but it's been the subject of renewed interest of late. Read Dr. Michael O'Leary's Perspective at: http://www.urologytimes.com/Oleary