Apalutamide plus abiraterone does not improve survival in mCRPC

Adding apalutamide (Erleada) to abiraterone acetate (Zytiga) and prednisone did not improve overall survival versus abiraterone/prednisone alone in patients with chemotherapy-naïve metastatic castration-resistant prostate cancer (mCRPC), according to results from the phase 3 ACIS study.1

Janssen Pharmaceutical (Johnson & Johnson), the developer of apalutamide, reported in a press release that it will no longer be pursuing regulatory approval of the novel treatment regimen.

“These data will be important in informing future programs in our pipeline, as we look to build upon our leadership and commitment in bringing transformational therapies to patients diagnosed with prostate cancer,” added Patel.

Overall survival was a secondary end point of the ACIS trial; the final results for the primary end point of radiographic progression-free survival (rPFS) were previously reported at the 2021 Genitourinary Cancers Symposium.2 The results showed that adding apalutamide to abiraterone and prednisone reduced the risk of radiographic progression or death by 30% in patients with chemotherapy-naïve mCRPC.

The double-blind phase 3 ACIS study included 982 patients with chemotherapy-naïve mCRPC who received ADT. Baseline characteristics were well balanced between the 2 treatment arms. Overall, the median patient age was 71 years, about 53% of patients had a Gleason score >7, the median PSA level was about 32 ng/mL, and all patients had an ECOG performance status of 0 (68%) or 1 (32%).

Patients were randomized 1:1 to apalutamide (n = 492) or placebo (n = 490) plus abiraterone and prednisone. All patients remained on continuous ADT. Patient randomization occurred between December 10, 2014, and August 30, 2016. 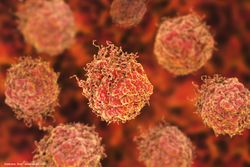