Istanbul, Turkey--Prostate inflammation significantly raises the risk of clinical progression in men with lower urinary tract symptoms and BPH, according to a first-time investigation into the impact of acute and/or chronic inflammation on men with BPH. The most significant impact of acute or chronic inflammation was an increased risk of acute urinary retention, particularly in patients receiving placebo, according to the analysis, based on a subset of patients from the Medical Therapy of Prostatic Symptoms (MTOPS) patient cohort. 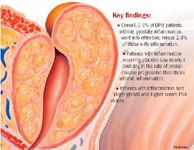 "We found no difference between placebo-treated patients or patients treated with single-arm therapy (doxazosin [Cardura] or finasteride [Proscar]) in terms of symptom improvement and endpoint progression if there was no inflammation present. I find that surprising to say the least," said lead author Claus G. Roehrborn, MD, professor and chairman of urology at the University of Texas Southwestern, Dallas.

Patients in the study were over the age of 50 years and had an International Prostate Symptom Score >8 points, serum PSA <10.0 ng/mL, and no restriction on prostate volume. The patients underwent transrectal ultrasound-guided sextant prostate biopsies at baseline, which was standard in the MTOPS trial. The study excluded MTOPS patients who had prostate cancer at baseline or during the study course.

While estimates vary, between 30% and 60% of surgical specimens (from TURP or open prostatectomy) contain infiltrates of acute or chronic inflammation (ACI), and the proportion is similar in prostate biopsies performed for elevated serum PSA, Dr. Roehrborn said.

"Inflammatory infiltrates in patients with LUTS and BPH are apparently of greater significance than previously recognized. Their presence in non-treated patients predicts a worse natural history, with more endpoints being reached," he said.

Histology detected no ACI in 53.5% of patients. Hyperplasia was seen in 40% of the samples. Total/free PSA values in the non-ACI and chronic inflammation groups were 2.3/0.5, and 3.1/0.6, respectively.

Total prostate and transition zone volumes were significantly different between the non-ACI and the ACI groups: 36.5 versus 40.3, and 16.1 vs. 19.2, respectively, in the non-ACI vs. ACI groups.

The ILLUMINATE-A trial of lumasiran in patients with primary hyperoxaluria type 1 supported the FDA approval of this drug.

The RNAi drug nedosiran is a once-monthly subcutaneous injection under investigation for all 3 types of primary hyperoxaluria.

FDA new drug application filing expected by the end of 2021.

A common enzyme that is easily detected in blood may predict how well patients with advanced kidney cancer will respond to a specific treatment, according to physicians at Duke Cancer Institute, Durham, NC.

Due to manufacturing issues, a formulation of the bladder cancer treatment bacillus Calmette-GuÃ©rin is currently unavailable from one manufacturer.