Challenging case: Hematuria in man with a history of prostate Ca

A 63-year-old African-American male presents to the emergency department with sudden onset of painless gross hematuria for one day. He reports dark red urine with clots causing occasional dysuria, difficulty emptying, and light-headedness.

A 63-year-old African-American male presents to the emergency department with sudden onset of painless gross hematuria for one day. He reports dark red urine with clots causing occasional dysuria, difficulty emptying, and light-headedness.

He had undergone a robot-assisted laparoscopic prostatectomy 12 years prior for pT2aN0 Gleason 3+4=7 prostate cancer, with negative surgical margins. His preoperative PSA was 8.6 ng/dL and his postoperative PSA nadir was <0.05 ng/dL 3 months after surgery. He was lost to follow-up until his current presentation. The patient notes that he received no further treatment for prostate cancer since his surgery.

His remaining past medical history is significant for hypertension, well-managed type 2 diabetes mellitus, and Paget’s disease of bone. He does not take any noteworthy medications. He denies family history of genitourinary malignancies and denies any history of smoking. He works as an MRI technician.

The patient is afebrile and presents with blood pressure of 133/90 mm Hg and heart rate of 97 bpm. His BMI is 30 kg/m2. He appears to have a slight pallor. His respirations are unlabored. His abdominal exam reveals a soft, non-tender, non-distended abdomen with well-healed port sites and a small, easily reducible umbilical hernia.

The patient’s genitourinary exam shows a circumcised phallus and bilaterally descended testes with no remarkable findings. His capillary refill time is 3 seconds. On insertion of a Foley catheter, there is return of cherry red-colored urine with clots.

A CT urogram is obtained (figure 1). Imaging reveals a heterogeneous 4cm enhancing mass at the right aspect of the bladder anterolaterally, with some stranding changes noted in the fat adjacent to this lesion. No hydronephrosis, pelvic lymphadenopathy, or sites of metastatic disease are found.

Next:What is your diagnosis?

The patient’s catheter is manually irrigated in the ED, with removal of a significant volume of clot. He is initiated on continuous bladder irrigation (CBI) and admitted for observation. On hospital day 2 his urine remains cherry red on moderate rate CBI. His vitals are notable for a pulse of 105 bpm with a blood pressure within the normal range. Hemoglobin and hematocrit are now 7.0 g/dL and 21.0%, respectively. His bladder is manually irrigated with a significant volume of clot removed again.

In light of his progressive anemia, he is transfused 2 units of packed red blood cells and taken to the operating room urgently for clot evacuation. Cystoscopic evaluation reveals no obstruction or obvious prostatic regrowth at his vesicourethral anastomosis. On entry into the bladder, a sizable, well-formed clot is appreciated. Following extensive clot resection, irrigation, and evacuation, a >5-cm tumor at the right lateral dome with a hemorrhagic surface and wide base is seen.

Resection of the mass is performed, but only partially, given the thin adjacent bladder wall. Tumor extension is noted well beyond this point. Once hemostasis is obtained, the procedure is terminated and the patient is reinitiated on CBI. The ureteral orifices are not identified intraoperatively but are not felt to be involved by the mass.

By hospital day 5, the patient remains on CBI and is transfusion dependent, and the decision is made to reevaluate his bladder cystoscopically. He is found to have several areas of bleeding that are fulgurated extensively. Postoperatively, he is successfully weaned off his CBI and discharged on hospital day 6 voiding clear urine.

Two days later, he re-presents to the ED with gross hematuria, normal vital signs, and stable hemoglobin. He denies any difficulty with voiding, and a post-void bladder scan reveals 0 cc. He expresses his strong desire to avoid catheterization. He is admitted for close observation, as he does not want to leave with active bleeding.

Fortunately, his pathology had returned earlier that day. Histologic evaluation of his tumor shows spindle cells in myxoid background extending into the muscularis propria and perivesical fat peripherally, consistent with inflammatory myofibroblastic tumor (IMT) (figures 2 and 3). IMTs, or inflammatory pseudotumors, are rare, typically benign, spindle-cell tumors felt to be associated with prior inflammatory processes, including trauma, prior instrumentation, infection, and autoimmune disease. The true cause is not well elucidated, however. On the molecular level, there is some evidence that these tumors develop due to a disruption in an RNA degradation pathway (J Clin Invest 2016; 126:3058-62).

Figure 3. IMT with involvement of the perivesical fat cells peripherally

IMTs can present throughout the body, with the lung being the most common site. According to a recent review of the literature, there are nearly 200 reported cases of bladder IMTs, the majority of which come from single case reports (Urology 2014; 84:503-8). The most common presenting symptom is gross hematuria, seen in over 70% of these cases, but other presenting symptoms may be subtler and include dysuria, frequency, abdominal pain, and loin pain. While this patient presented with symptomatic anemia, only 6% of patients with bladder IMTs ever develop anemia.

Histologically, IMTs are defined by myofibroblastic and fibroblastic spindle cells with inflammatory infiltrate of lymphocytes, plasma cells, eosinophils, and histiocytes. They are typically well vascularized. Grossly, they tend to be large, smooth, broad-based tumors with a propensity to bleed, as in this case, and have a mean tumor size is 4.5 cm (Urology 2014; 84:503-8).

The mainstay of treatment for bladder IMTs is surgical resection, with the most commonly selected option in roughly 60% of cases (Urology 2014; 84:503-8). This is followed by partial cystectomy in approximately 30% of cases and radical cystectomy in almost 10% of cases. In this same review, only 4/120 patients had local recurrence at a mean follow-up of 30 months, although it is notable that 18/120 (15%) of patients in this series required a second surgical procedure due to presumed incomplete resection by initial TURBT.

For patients with tumors not amenable to resection or for whom surgery would present an undue risk, there are investigational treatment modalities that have shown some promise. Berger et al reported success in use of neoadjuvant prednisone and COX-2 inhibitors to shrink an IMT in a 3-year-old boy that was sitting close to the bladder neck (Urology 2007; 70:372.e13-5).

Neoadjuvant platinum-based chemotherapy has also been used successfully to achieve resection of unresectable locally invasive IMTs (J Pediatr Hematol Oncol 2015; 37:e402-4). Germanides et al reported a near-complete regression of an aggressive gastrointestinal IMT with infliximab (Remicade) monotherapy (Dig Dis Sci 2005; 50:262-5). There are no reports of TNF-alpha inhibition treatment having been utilized in bladder IMTs, although this could be a promising area for investigation as TNF-alpha is a potent mediator of inflammation, which is believed to be critical to the formation and propagation of IMTs.

The success of these interventions, theoretically, could be limited by their systemic effects. In the era of targeted biologic therapy, there is a push to identify novel targets unique to the malignancy, thus limiting the undesirable systemic effects of medical treatment. Approximately 50% to 60% of IMTs express various rearrangements of anaplastic lymphoma kinase (Am J Surg Pathol 2001; 25:1364-71; Am J Surg Pathol 2007; 31:509-20), a tyrosine kinase at the chromosome 2p23 locus.

Interestingly, this rearrangement was found in our patient. Numerous authors have investigated the prognostic implications of ALK expression and it appears that it is correlated with higher local recurrence rates, but reduced rates of metastasis in cases of non-bladder IMTs (Am J Surg Pathol 2007; 31:509-20). Butrynski et al reported a case of a man with diffuse abdominopelvic IMT treated with neoadjuvant and adjuvant crizotinib, an ALK inhibitor, who achieved a sustained remission of his disease despite incomplete surgical resection (N Engl J Med 2010; 363:1727-33)with a tolerable side effect profile.

Despite early successes with novel medical therapies, surgery is the only intervention that has proven curative for IMTs. Given the reported success in treatment of bladder IMTs in the available literature, urologists should pursue resection, by TURBT or partial cystectomy, barring exceptional circumstances and an IRB-approved research protocol.

The patient underwent a robot-assisted partial cystectomy. The decision to pursue partial cystectomy rather than repeat TURBT was made based on the extent of the tumor and difficulty in achieving complete resection endoscopically. The robotic approach was made more difficult by his prior robot-assisted laparoscopic prostatectomy, but the anterior bladder was successfully mobilized. Identification of the residual tumor-a 4 cm tumor on the right anterior surface of the bladder, sparing the ureteral orifices-was achieved with the assistance of concomitant flexible cystsoscopy. This lesion was successfully excised with a small mucosal margin via a vertical midline cystotomy and adequate residual bladder volume (figure 4).

Following cystorrhaphy, a drain was left in the pelvis through a right robotic port site. The patient was discharged home on postoperative day 2 without a drain after drain creatinine revealed no evidence of a urine leak. His Foley catheter was removed on postoperative day 7. Final pathology revealed IMT with negative surgical margins. At his 6-month follow-up, the patient had no residual hematuria or voiding complaints. A repeat cystoscopy was performed and revealed no residual bladder masses. Given the benign nature of his pathology, no further cystoscopic evaluations have been indicated. He continues to be followed for routine prostate cancer surveillance, and his PSA currently remains undetectable 2 years following his partial cystectomy.

Dr. Kenigsberg is a resident, Dr. Singla is assistant instructor and fellow, and Dr. Cadeddu is professor of urology and radiology at UT Southwestern Medical Center, Dallas. 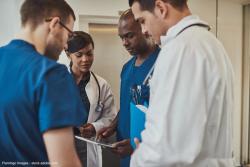