Inflammation is highly associated with traumatic sequelae of robotic laparoscopic radical prostatectomy, but it appears that preemptive, loco-regional hypothermia to the pelvis will largely mitigate its harmful effects. 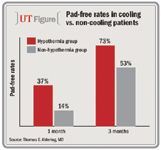 "Urologists have been using hypothermia as far back as the 1960s and '70s in partial nephrectomy and renal transplantation," said Dr. Ahlering, professor and vice chair of urology at UC Irvine.

"We had come to the conclusion earlier that there was no way to remove the prostate without inducing some traction injury," he said. "That led us to believe that nerve rehabilitation was the next frontier."

Dr. Ahlering's team achieves pelvic cooling through the use of cold irrigation and an endorectal cooling balloon cycled with saline at 4ºC.

"When we first began this work in February 2008, our focus was on potency," Dr. Ahlering said. "But shortly after we began, it was apparent that men were getting free of urinary pads more quickly than normal. Pad-free continence is a more objective outcome that all men undergoing radical prostatectomy share, whereas potency is an issue in only about 50% of men, is much more subjective, and takes much longer to assess."

Still, Dr. Ahlering's team is continuing the search for more pronounced results with hypothermia in sexual function. One possibility is a new balloon system that, unlike the current system, will not require shutdowns during critical parts of the surgery because of space limitations with the balloon. Postoperative cooling time may also affect potency, Dr. Ahlering noted.

It is significant that patients in the study were at least 70 years of age, he added. Older men tend to take longer to recover continence after surgery, and in 20% to 50% of cases, they never attain pad-free status.

"The older the man, the higher the risk. We just assumed it was because older men don't recover as well," said Dr. Ahlering. "But in this group, men were getting off of pads at a much higher rate, so it appears that by controlling the inflammatory aspect of the procedure, we're especially helping older patients. Specifically, it's the inflammatory component from which the older patients weren't recovering as well as the younger patients."

UC Irvine has entered into a licensing agreement with Innercool Therapies, Inc., San Diego, for the purpose of developing the endorectal cooling balloon system.

Innovation is at the cornerstone for care in Cleveland Clinic’s Department of Urology, and it’s enabling experts to deliver more personalized approaches to patients.

“Even though we set some priority areas, we also allow practicing urologists to make suggestions for things that they want to know about,” says Amanda North, MD.

"I am prepared and excited to be fully immersed in the health policy work of the AUA as the 2023 Gallagher Scholar," says Denise Asafu-Adjei, MD, MPH.

Although cases of acute urinary retention and defecation caused by herpes zoster in the sacral area have been reported, no clinical cases about spontaneous bladder rupture have been previously published, according to the authors.