Prostate cancer symptoms were mistaken for other conditions.

A 57-year-old unemployed man with benign prostate hyperplasia (BPH) presented to his primary care physician. The patient reported that he had found a coin-sized bloody stain on his underwear after having engaged in sexual activity. The primary care physician ordered a blood test, and the test’s results revealed that the blood did not contain an abnormally high concentration of prostate-specific antigen (PSA).

Four months later, the patient returned. He reported that he had detected a lump in 1 of his axillae, and he also reported that he had not been able to maintain an erection. Tests did not reveal any abnormalities, so the primary care physician prescribed sildenafil citrate (Viagra).

The patient’s family brought a medical malpractice suit against the primary care physician, alleging that the disease could have been detected at least 1 year earlier and that prompt referral to a urologist and treatment would have saved his life.

At trial, the plaintiff’s attorney argued that the prostate cancer’s symptoms mimicked those of an enlarged prostate and that the patient’s first reported symptoms should have prompted a referral to a urologist, who could have performed the necessary tests that would have revealed cancer. The plaintiff’s expert urologist opined that prostate cancer is not easily detected, which is why the referral and involvement of urology was necessary.

The patient died at age 62. He was survived by his wife, several adult children, and grandchildren.

After 3 days of trial, the jury deliberated for 1½ days, then returned a verdict for the plaintiff. In their responses to jury interrogatories, the jury found that the primary care physician breached the standard of care by failing to issue a timely referral to a urologist, and that this failure caused an incurable spread of cancer. The jury awarded the plaintiff $2.2 million.

LEGAL PERSPECTIVE: A number of state legislatures have passed tort reform and limited damage awards in medical malpractice cases in response to rising health care costs and what some see as frivolous medical malpractice claims. The actual cap varies widely state to state, and it also varies as to what types of claims are subject to caps. For example, because this case was a wrongful-death claim, the state caps did not apply.

Perko is an attorney in the Columbus, Ohio office of Reminger Co, LPA, where she specializes in medical malpractice defense litigation and transactional matters. She welcomes your feedback on this column at APerko@reminger.com. 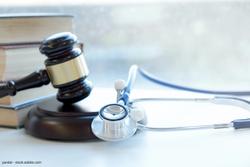