Does stone-related atherosclerosis start in childhood?

Lisette Hilton, president of Words Come Alive, has written about health care, the science and business of medicine, fitness and wellness for 25 years. Visit www.WordsComeAlive.com.

Researchers compared artery thickness in children with and without kidney stones.

A leading pediatric urology expert called the findings “thought provoking.” The study was published online in the Journal of Pediatrics (Sept. 10, 2015).

Read: Alpha-blocker may have benefit in larger stones

“If the processes of kidney stone formation and hardening of the arteries are somehow linked in adults, it makes sense that a similar link may exist in children, despite the fact that people don’t associate heart and vascular diseases with kids,” said lead author Kirsten Kusumi, MD, of Nationwide Children’s Hospital in Columbus, OH, who worked on the study with Andrew L. Schwaderer, MD, and colleagues.

Scientists from Nationwide Children’s Hospital matched 15 children ages 12 to 17 years of age with kidney stones and 15 children without kidney stones. None of the children had been diagnosed with conditions known to cause atherosclerosis.

NEXT: Study begins to identify potential reasons for the association of nephrolithiasis and vascular disease

This study begins to identify potential reasons for the association of nephrolithiasis and vascular disease, according to the authors.

“An association between calcium nephrolithiasis and atherosclerosis has been reported in adults. Hence, it is not surprising that an association might exist in children also. It is, however, thought provoking that the authors found that even in teens, early signs of atherosclerosis could be identified,” said Dr. Kogan, a Urology Times Editorial Council member.

“The question of etiology is particularly interesting to urologists. Perhaps there is a common biological explanation. Would a tendency to calcification affect both vessels and the renal collecting system? On the other hand, the connection may be merely one of association. Calcium stone patients tend to have more hypertension, are more obese, and likely eat higher salt diets. These factors and others not yet recognized might affect both stone formation and atherosclerosis,” commented Dr. Kogan, who was not involved with the study. 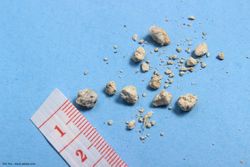 Do you prefer dusting or basketing when removing kidney/ureteral stones?