"Certainly, the Optilume drug-coated balloon appears to be safe and effective in roughly two-thirds of patients at 3 years," said Justin Chee, MD.

At the 2021 International Continence Society Meeting, Justin Chee, MD, presented 2 studies on the Optilume drug-coated balloon (DCB) that emphasized the safety and efficacy of this device in treating patients with recurrent anterior urethral stricture disease.1,2 In a recent interview, he discussed the findings of these studies and their importance for future treatment in this cohort of patients. Chee is a reconstructive urological surgeon at MURAC Health, East Melbourne, Australia.

Please discuss the background for these studies.

Recurrent anterior urethral stricture diseases is a common disease, as seen by urologists. It's a difficult disease to treat because the standard of care endoscopic treatment has a high failure rate, with some papers suggesting, if observed long enough, a 100% recurrence rate. The gold standard for treating recurrent anterior urethral stricture disease is a urethroplasty, which is quite an invasive operation that takes a number of hours and has a prolonged recovery.

What our studies were looking at was a novel device that could potentially help bridge the gap between these 2 treatments with a minimally invasive endoscopic treatment but to achieve greater success. The device is called Optilume balloon drug coated balloon. It's coated with paclitaxel. The device was originally proposed because paclitaxel-coated balloons have been used in vascular surgery, in particular peripheral vascular disease, with apparent success long-term compared to standard balloon dilators. So, the Optilume DCB for urethral strictures was developed to allow mechanical dilatation of the stricture followed by accurate delivery of paclitaxel, and a trial was undertaken.

What were some of the notable findings? Were any of them surprising to you or your colleagues?

In the ROBUST III trial, the interesting findings are that at 6 months, anatomic success with a flexible cystoscopy was undertaken, and 75% of patients were successful. The second part of the trial that was looking at functional success at the 3-year mark showed that responders with greater than 50% improvement in International Prostate Symptom Score was 67%. Because of this very strong data, a randomized control trial was undertaken, the ROBUST III trial. This is a single-blinded trial looking at about 128 patients. It was powered to be done in 126 patients with a 90% chance of seeing the correct observations. In that trial, you could compare where the Optilume DCB had a difference between a standard of care endoscopic treatment in a recurrent urethral stricture vs the Optilume drug-coated balloon. And in fact, the anatomic success once again in the group with the Optilume was 75% compared to a much lower level of patients, about 25%, in the standard of care treatment. Then up to 1 year, we saw a great divergence of the patients in terms of their functional outcomes or failure from the treatment arm. In fact, only 14 patients in the standard of care endoscopic treatment control arm achieved no further interventions compared to the Optilume DCB arm.

What is the significance of these findings for patients with recurrent anterior urethral strictures?

As mentioned, there's a big gap between endoscopic treatment standard of care vs the gold standard for treatment of recurrent anterior urethral stricture disease, which is urethroplasty. One is minimally invasive with low long-term success. One is a very invasive open surgery with good success rates long term, but difficult recovery for patients. This is an attempt to bridge the gap. So, we are finding that there appears to be great success and this may be a breakthrough for patients to bridge that gap with an endoscopic procedure, with improved success and low morbidity.

Is there further research on the Optilume DCB planned? If so, what will its focus be?

At the moment, the 2 trials are going to be continuing out to 5 years to see what the complete data is. I think that's important to know that these devices are successful long-term. And interestingly, in both studies, there appeared to be stability, beyond the roughly 6 to 12 months mark, where the success is achieved and stabilized. So, in the ROBUST I trial, the functional success at 2 years of 68% was very similar to the functional success at 3 years of 67%. If you compare the ROBUST I and ROBUST III trials, those curves are very similar and we hope the stability will occur in that randomized control trial similarly out to 5 years.

The second area of interest is going to be what happens to the failure group. In the group that failed, what happens when they then go on to have the gold-standard urethroplasty? In that group, if they then had a urethroplasty, what's the chance of that being successful? And is that affected by the prior treatment of the Optilume drug-coated balloon? I believe there are a number of different centers looking at a more complex anterior urethral stricture disease. In particular, areas of interest that are very difficult to treat are radiation-induced urethral strictures and recurrent or failed prior open urethroplasty strictures. So, it'd be interesting to see where that comes out.

Recurrent anterior urethral strictures can be difficult to treat. The standard of care endoscopic management using the Sachse optical urethrotome is almost 50 years old. A novel device the Optilume Drug Coated Balloon has been developed and 2 major studies indicate its groundbreaking potential. Further research is being undertaken to confirm this, but certainly, the Optilume DCB appears to be safe and effective in roughly two-thirds of patients at 3 years. 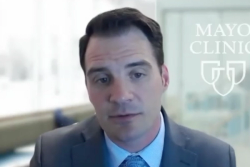