Erectile function aided by sparing nerves, regardless of route

Nerve-sparing radical prostatectomy is likely to help preserve erectile function regardless of the route of operation; however, nerve sparing appears to have no impact on the prevalence of postoperative incontinence.

Glasgow, Scotland-Nerve-sparing radical prostatectomy is likely to help preserve erectile function regardless of the route of operation; however, nerve sparing appears to have no impact on the prevalence of postoperative incontinence, recent research suggests.

Researchers screened 780 men who underwent prostatectomy by three different routes: abdominal, perineal, and laparoscopic. The men had been enrolled in a randomized, controlled trial of conservative therapy known as Men After Prostate Surgery (MAPS). 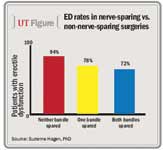 Investigators measured the prevalence of urinary incontinence at 3, 6, 9, and 12 months after prostatectomy and assessed ED at 12 months following surgery.

"When we looked at urinary incontinence 12 months after surgery, we found that there was no difference between those three different ways of doing the operation," Dr. Hagen said.

In addition, whether nerves were spared during surgery did not influence the rates of urinary incontinence at 12 months postoperatively (p=.83).

"It didn't make a difference if nerves were spared during surgery in terms of the urinary incontinence," Dr. Hagen said.

When investigators went on to look at the prevalence of erectile dysfunction, which was defined as no erection or drastically reduced stiffnes, they found 80% of men overall had persistent ED at 12 months.

"If surgeons were able to leave one or two bundles of nerves, that made a difference in the result. It meant they were less likely to have erectile dysfunction at 12 months," said Dr. Hagen. "It's not always possible to spare the nerves. It depends on the patient and cancer [tumor size], but if you can spare the nerves, it seems it is better to do that."

The patient was treated as part of a clinical study of the novel MONARCH platform at UCI Health in California.