The 35-day government shutdown over President Trump’s border wall may have had a direct impact on many urologists beyond the many inconveniences and the cost to taxpayers that it caused-a reduction of 22% in the reimbursement rate for a popular procedure.

The 35-day government shutdown over President Trump’s border wall may have had a direct impact on many urologists beyond the many inconveniences and the cost to taxpayers that it caused-a reduction of 22% in the reimbursement rate for a popular procedure.

Because of the shutdown, leaders representing urology were unable to meet with officials at the Centers for Medicare & Medicaid Services (CMS) to discuss their concerns regarding the agency’s Hospital Outpatient Prospective Payment System (OPPS) and Ambulatory Surgery Center (ASC) Payment System final rule for 2019.

The rule, which has the effect of slashing reimbursement to ASCs for extracorporeal shock wave lithotripsy (ESWL) by 22%, will make it difficult for many patients in rural communities to gain access to this procedure as they seek treatment for kidney stones, according to the major groups representing urologists.

Although unable to change CMS policy for this year, officials from the AUA, LUGPA, and the AACU are working together hoping to convince CMS to make meaningful changes in its 2020 OPPS-ASC payment rule. At press time, a working group representing the three organizations was seeking a meeting with CMS officials to discuss the matter.

At issue is the 2019 rule’s migration of ESWL from Ambulatory Payment Classification (APC) 5375 to 5374, which LUGPA, in Jan. 2 written comments to CMS, said would result in ASCs seeing their ESWL payment rates slashed by some 22%, well below the cost of providing the service. As a result, LUGPA cautioned, many ASCs, particularly those in rural areas with insufficient volume, would be unable to provide ESWL services and patients would be forced to visit hospital outpatient departments.

Deepak Kapoor, MD, LUGPA chairman of Health Policy and past president, explained that by shifting lithotripsy to a lower APC “bucket,” while hospitals make less money, it is still sufficient to cover their cost. But, he said, “CMS did not recognize that most people do not own their own lithotripsy machines. Mobile ESWL providers charge the facility for that machine depending on the locale. Most people rent the machine for the day along with the technical personnel to operate it.”

The rate change still leaves hospitals above the fair market value for the acquisition of these services, Dr. Kapoor said, “but that is no longer the case for ASCs because they now are getting paid about 42% of what the hospital receives to use the exact same machine with the exact same technicians.”

As a result, he added, “Some people are beginning to scramble. Some may be able to renegotiate the contract if is big enough, but for the rural client that is very difficult. CMS failed to properly understand the dynamics. Their base assumption is that most people own the lithotripter. That is not at all the case.”

The change has implications even beyond payment for ESWL services, Dr. Kapoor stressed.

“Moving procedures around within APCs fundamentally alters reimbursement for every other APC because they figure it on weighted cost,” he explained. “When you move the CPT code for lithotripsy, because of the volume of services it completely changes the dynamics of how other procedures within the APC are paid. Consequently, it actually becomes much more complicated than simply moving ESWL back to the original APC.

“Historically, CMS recognized the uniqueness of lithotripsy and considered it in its own bucket. That’s really the ideal solution and what we want to advocate for.”

In its Jan. 2 letter to CMS Administrator Seema Verma, LUGPA offered suggested solutions to the problem:

“We had planned on meeting with CMS during the comment period after the final rule was issued, but we got timed out because of the government shutdown,” said Dr. Kapoor. “AUA, AACU, and LUGPA are all working together to help CMS understand the economic ramifications of what they’re doing, as well as the impact on access to care particularly on lower volume hospitals in rural areas. We want to see if we can get it fixed for 2020.”

AACU President Mark Edney, MD, said the three organizations have been in close contact via their monthly joint conference call.

“It’s a huge threat to the potential availability of lithotripsy services, particularly in rural settings,” he said. “We will be moving services to hospitals and away from ASCs. It is an unfortunate rule; we feel strongly that something needs to be done.” 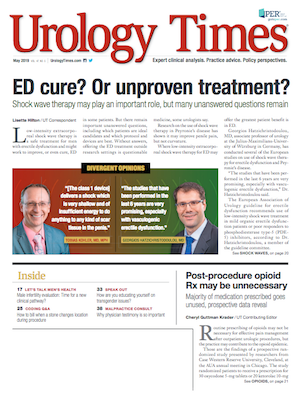 The pros and cons of buying vs. renting your home
ESWL reimbursement slashed by 22%
Related Videos
Related Content

While AI is promising, there are potential legal and ethical challenges that must be addressed, according to the experts.

"The AACU joined 1 effort calling for the administration to remove the directive that arbiters anchor their determination to the qualifying payment amount, and instead let them consider all allowable information submitted by the parties to support their offer," says Ross E. Weber of the AACU.

"Our success depends on your assertive action and membership in organizations serving our specialty—the AACU in particular—as well as your state medical association," writes William C. Reha, MD, MBA.

Urology Times reached out to 3 urologists and asked them, "How did you cope with the increased stress the pandemic has placed on your life?"