‘Fee for service is going away’: What it really means

Since graduating from medical school, one of the most prevalent commentaries I have heard about health policy is “Fee-for-service is going away.” Depending on the commentator’s level of cynicism, that would be followed with either “You won’t be able to make a living in medicine anymore” or the milder “It’ll be interesting to see what happens.” Read more on Dr. Kaplan's insight on fee-for-service and what it means.

Since graduating from medical school, one of the most prevalent commentaries I have heard about health policy is “Fee-for-service is going away.” Depending on the commentator’s level of cynicism, that would be followed with either “You won’t be able to make a living in medicine anymore” or the milder “It’ll be interesting to see what happens.”

The changing dynamics of physician reimbursement is, to put it mildly, interesting. Below is an attempt to simplify the alphabet soup of complex acronyms and provide an example of how a urology practice may operate in one type of model. For the health policy aficionado, forgive my oversimplification. For the uninitiated, this is how you’ll put food on the table, so stay awake.

CMS (Centers for Medicare & Medicaid Services). CMS is the administrative body for Medicare and Medicaid, among other things. Since Medicare is the single largest insurer in the United States, the terms “CMS” and “Medicare” are sometimes used interchangeably. Although Medicare is a government-sponsored program, it uses about 30 private insurance companies to run it. Since CMS provides health insurance to 100 million Americans, its policies tend to be very impactful. Given the unsustainable health care spending and subpar overall quality, access, and equity in the United States, CMS wants to phase out the traditional fee-for-service payment model.

Read: Why urology residents should care about health policy

MACRA (Medicare Access and CHIP Reauthorization Act of 2015). Nicknamed the “Permanent Doc Fix,” MACRA was signed into law in April 2015 and sets the stage for a glacial shift in the way doctors get paid to deliver care to Medicare patients. And since CMS’s policies have such a wide footprint, MACRA’s effect is expected to ripple throughout the health care space. The ultimate goal of MACRA is to move away from historical fee-for-service models into an environment where quality and value, rather than volume, are prioritized.

MACRA includes two separate payment tracks that will go into effect by 2019: MIPS and APMs (more on these below). Physicians and provider organizations will be able to choose which track to pursue based on their strengths and weaknesses.

MIPS (Merit-Based Incentive Payment System). MIPS is effectively a continuation of fee for service modified to tie in pay for performance. Simply put: do better, make more. The performance metrics will include quality, resource use, and clinical practice improvement. Although MIPS originally included Meaningful Use–an incentive program promoting the use of electronic health records in a “meaningful” way–the acting administrator of CMS recently announced he would sunset that program in light of the blinding rage and fury it incited among many physicians.

Some experts believe that Medicare will set the quality bar so high that achieving the performance goals will be exceedingly difficult and may result in declining reimbursement for those pursuing the MIPS track.

APMs (alternative payment models). The second payment model under MACRA consists of APMs. The Department of Health and Human Services (HHS)–the body governing CMS, the FDA, NIH, CDC, etc.–not so subtly supported this option in stating that it will “intensify its work with states and private payers to support the adoption of alternative payment models.” If APM sounds like a catchall phrase for anything but fee for service, it basically is. The classic APM is the Accountable Care Organization (ACO) but may also include bundled payment models and patient-centered medical homes.

Payers, policy makers, and health care organizations are scrambling to define what these APMs will look like, but the underlying themes will surround efficiency and value. “Value” in this context translates to higher quality care provided at a lower cost and, ideally, translates to shared savings for both payer and provider.

Next: A urological APM: Hypothetical example

In urology, an APM may function as follows. A large urology group practice enters into a contract with an insurance plan to offer comprehensive urologic care for men with localized prostate cancer. The group is paid a standardized set fee per patient. More expensive treatments or bad outcomes resulting in higher health care utilization (eg, proton beam radiotherapy or a readmission, respectively) will decrease the group’s margin for that individual patient.

Also read-Slowing down: Veering from the modus operandi

A year ago, HHS Secretary Sylvia M. Burwell announced her goal of tying 30% of fee-for-service payments to quality or value by the end of 2016. Whether that goal will be reached remains to be seen, but the writing is on the wall: traditional, volume-based fee for service payment models are being phased out while value-based efficient health care is being prioritized. Fee-for-service medicine is not going away, per se, but it may become less profitable and more challenging. Having explained this dynamic shift to a third-year medical student rotating with me last month, I was asked whether I thought this was a good thing. Feeling optimistic that day I responded wryly, “Oh it’ll be interesting alright.”

Dr. Danica May on benefits of a rotation at KU Urology 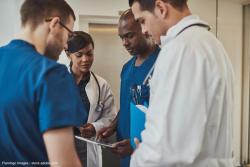