Atlanta-The impact of environmental toxins on male sexual development has become a topic of keen interest among pediatric urologists, who have released a growing body of data suggesting environmental links to hypospadias, cryptorchidism, and other urinary tract anomalies and diseases. At the 2006 American Academy of Pediatrics Section on Urology annual meeting, several groups presented data on the effect of in utero exposure to endocrine disrupters on the developing fetus.

The current data, while suggesting a cause-and-effect relationship, are largely based on animal models and questionnaire-based studies.

BP-2 is a common additive in cosmetic products and plastic food containers. The UCSF team found that in utero exposure to BP-2 upregulates estrogen receptor (ER) beta in the genital tubercle and causes hypospadias in an ER-dependent manner.

Pregnant mice were treated with control vehicle, BP-2 alone, or BP-2 plus the ER-antagonist EM-800 from gestational days 12 through 17. The mice were sacrificed on day 18.

Hypospadias developed in eight (14%) of 57 male fetuses of female mice treated with BP-2 alone (p=.0064). None of the fetuses of mice treated with control vehicle, EM-800, or BP-2 plus EM-800 developed hypospadias. Real-time polymerase chain reaction experiments revealed that the genital tubercles of BP-2-treated male fetuses expressed higher levels of ER-beta than did male controls (p=.04). In fact, levels of ER-beta in females and BP-2-treated males were comparable.

"BP-2 is so ubiquitous. It's not established whether the dose we tested is relevant to human exposure," Dr. Hsieh said. "Further studies investigating the effect of BP-2 exposure in humans may be warranted."

Another in vitro study, performed by John P. Gearhart, MD, and colleagues at the Johns Hopkins Hospital in Baltimore, tested the effects of the phytoestrogen genistein in rats. Previous studies by this group have demonstrated that genistein exposure can lead to deleterious changes in male rat genitalia and reproductive behaviors. The current study aimed to discern the molecular basis of these abnormalities.

Rats were fed a diet with low levels of genistein (5 mg per kg of food) or a normal diet (control). They continued this diet through timed mating, pregnancy, and weaning. RNA was extracted from the lower genitourinary tissue at gestational days 14, 16, 18, 21, and 2 weeks after birth. 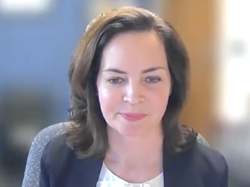