Placement of an inflatable penile prosthesis (IPP) approximately 3 months after T-shunt surgery in men with acute ischemic priapism and refractory erectile dysfunction is associated with favorable outcomes at 1 year, according to data from a small series of such patients.

Ottawa, Canada-Placement of an inflatable penile prosthesis (IPP) approximately 3 months after T-shunt surgery in men with acute ischemic priapism and refractory erectile dysfunction is associated with favorable outcomes at 1 year, according to data from a small series of such patients.

In describing a series of seven patients with prolonged ischemic priapism for 48 to 72 hours managed acutely with bilateral T-shunts, dense distal corporal fibrosis was observed at the time of penile implant, said first author Anthony Bella, MD, Greta and John Hansen Chair in Men’s Health Research and assistant professor of urology at the University of Ottawa, Canada.

“Although a large percentage of patients do not recover erectile function after prolonged priapism and T-shunt surgery,” he said, “studies from Dr. Tom Lue at the University of California, San Francisco and Dr. Arthur Burnett at Johns Hopkins are supportive of these contemporary shunts, as rates of recovery can approach 25%-30% as compared to no recovery with traditional approaches.”

In their series of seven patients operated on in 2010, five did not recover erectile function and opted for placement of an IPP.

“After discussion of the risks and benefits, they chose to go with a three-piece IPP,” Dr. Bella said. “We were interested in knowing whether the distal T-shunt, or the analogous Burnett corporal ‘snake,’ would cause loss of structural integrity, have the potential for erosion or require secondary intraoperative maneuvers, or cause post-surgery complications within a year.”

Color duplex ultrasound was performed to evaluate cavernosal arterial flow post T-shunt and then prior to IPP in all cases. Comparison was made to post-Al-Ghorab IPP results from separate institutions.

“All post-T shunt patients with dilation were complicated by distal corporal fibrosis,” said Dr. Bella. “All five required a distal secondary incision on the ventral aspect to gain access. That’s the key point: If you start to dilate in these patients and you’re getting distal, increasing your probability of perforating the urethra, a second access point makes sense to allow for direct dissection into the corpora… we have to be prepared that surgery in these patients may be a little different than run of the mill.”

All cases were successful, with no erosions or early mechanical failures. The erection hardness score was a mean of 4 at 6 months’ follow-up, and the International Index of Erection Function improved by a mean of 17 points from baseline. There were no device infections or second procedures.

“Even though the surgery is a little more complicated, we’re looking at 1-year outcomes that are quite favorable,” said Dr. Bella, who presented the findings at the 2012 AUA annual meeting in Atlanta.

“There is a cavernosal hyperemia that can look like priapism recurrence to the clinician; you don’t want to take a man back to the operating room in error following the T-shunt,” Dr. Bella said.

The optimal timing of the IPP placement after surgery is unknown.

“Three months is logistically when I can get these men back into surgery; that works in our favor from an erosion standpoint,” said Dr. Bella. Surgical time averaged about 90 minutes, compared with 37 minutes in a series of men undergoing Al-Ghorab procedures, which did not require a second incision.

“The T-shunt is simple, effective, and reproducible,” concluded Dr. Bella. “It has changed how my colleagues, both penile reconstructive specialists and general urologists, deal with these refractory priapism cases. It makes sense to at least have this in your armamentarium.” 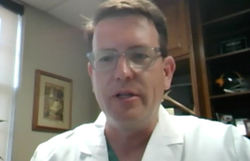