"The biggest advantage of this technique is that because the sound waves are coming from inside and going outwards, it doesn't destroy anything beyond the prostate, at least in theory,” said Michael Koch, MD.

MRI-guided transurethral ultrasound ablation (TULSA) provided durable disease control with low toxicity at 3 years’ follow-up in men with localized prostate cancer, according to pivotal findings shared at the 2022 Annual Meeting of the North Central Section of the AUA.1

In an interview with Urology Times, study author Michael Koch, MD, chair of the Department of Urology at the Indiana University School of Medicine, provided some background on the TULSA technique.

“There are a number of different techniques to ablate prostate tissue…This technique is a probe that goes in a man's urethra and then emits sound waves that go from inside the prostate towards the outside. And it's done in an MRI machine that can measure tissue temperature. The procedure is done until you drive the tissue temperature up high enough to coagulate all the protein in the tissue and kill the tissue. The biggest advantage of this technique is that because the sound waves are coming from inside and going outwards, it doesn't destroy anything beyond the prostate, at least in theory.”

Koch said that 11 of the patients on the study were treated at his institution and that his outcomes matched the overall study population with 82% (9) of patients not requiring further therapy and 18% (2) of patients receiving salvage treatment at 3 years. Further, at 1 year, GG2 disease had been eliminated in 80% (8) of the 10 patients treated at his institution who had GG2 at baseline.

Of note, Koch said the study was able to establish that if TULSA fails, it is feasible to perform post-TULSA salvage radical prostatectomy, which he said has been safely done at his institution.

Regarding safety, 9 (8%) men in the overall study population experienced grade 3 adverse events (AEs), all of which were resolved by 1 year.

Now that the efficacy and safety of TULSA have been established in this study, there is an ongoing randomized trial comparing TULSA with radical prostatectomy in patients with intermediate-risk prostate cancer. 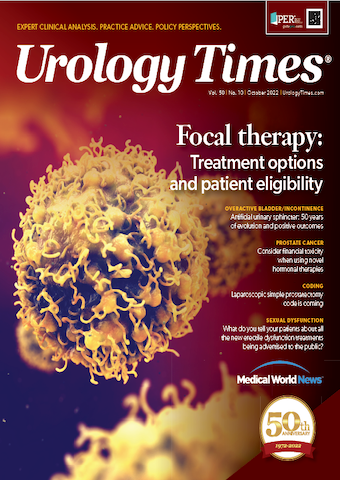 What are your thoughts on reporting CPT code 64590 when placing an eCoin device?
How to understand Medicare from the patient perspective
What physicians should know about apologizing to patients
Consider financial toxicity when recommending novel hormonal therapies for prostate cancer
Pushing past the pandemic’s impact on prostate cancer screening
Botox, sacral nerve stimulation highlighted as emerging OAB treatments for elderly patients
Diversity in Urology: Progress made, but there is more work to be done
Trial launches of imaging agent for PSMA-negative prostate cancer patients
Long-term data support MRI-guided TULSA for localized prostate cancer
Artificial urinary sphincter: 50 years of evolution and positive outcomes
What do you tell your patients about all the new erectile dysfunction treatments being advertised to the public?
EU OKs novel biomarker and machine learning–powered test for prostate cancer
FDA accepts application for N-803 in NMIBC
Related Videos
Related Content