Premature ejaculation agent is efficacious, regardless of circumcision status

An investigational metered dose, aerosolized spray containing a mixture of lidocaine and prilocaine (PSD502) is an effective treatment for premature ejaculation in both circumcised and uncircumcised men, although the magnitude of response is relatively greater in uncircumcised men. 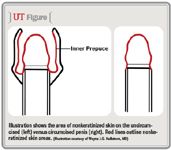 Results from a 3-month, double blind phase of the phase IIb clinical trial demonstrated PSD502 was safe and effective for improving premature ejaculation. However, since the mechanism of action of the desensitizing agent depends on percutaneous absorption of the active agents through the non-keratinized skin of the glans penis into sensory nerves and considering that the degree of keratinization of the circumcised glans penis is modest, the data were analyzed stratifying men by circumcision status, explained first author Wayne J.G. Hellstrom, MD.

PSD502 formulates the two topical anesthetic agents in a propellant solvent. For each dose, the man applies three sprays to the glans penis 5 minutes prior to intercourse and then wipes the skin surface. Uncircumcised men were instructed to pull back the foreskin prior to applying the spray.

"The aerosolized spray formulation provides faster drug delivery and is more user-friendly than currently used topical anesthetic creams or gels, none of which are FDA-approved for the treatment of premature ejaculation, that can take 15 to 60 minutes to become effective, and are also messy and need to be washed off prior to intercourse," Dr. Hellstrom stated.

In the phase IIb study, 256 men were initially randomized 2:1 to PSD502 or placebo. Eligible men had to have an IELT of 1 minute or less during at least two of three sexual attempts during a 1-month run-in period. Efficacy analyses were based on data from 227 men who completed the 3-month double-blind phase.

For the IPE, which is a 10-item questionnaire covering three domains (control, satisfaction, and distress), the circumcision subgroup results showed a similar pattern, with circumcised men benefiting less than uncircumcised men, but still achieving changes that were both clinically and statistically significant compared with their respective control groups.

The safety review showed no serious adverse events related to study drug and no differences in the adverse event profile of PSD502 between circumcised and uncircumcised men.

Dr. Hellstrom was a clinical investigator in the PSD502 trial and is an unpaid adviser to Shionogi Pharma, Inc., which provided funding for the study.

The patient was treated as part of a clinical study of the novel MONARCH platform at UCI Health in California.