Robotic cystectomy a 'teachable' technique according to study

Urologists at the University of North Carolina, Chapel Hill have been at the forefront in conducting research generating evidence necessary to determine the clinical role of robot-assisted laparoscopic radical cystectomy.

Chicago-With the emergence of robot-assisted laparoscopic radical cystectomy (RALRC) as a less invasive surgical approach to the treatment of localized, invasive bladder cancer, urologists at the University of North Carolina, Chapel Hill have been at the forefront in conducting research generating evidence necessary to determine its clinical role.

At the American College of Surgeons Clinical Congress, Angela Smith, MD, a urologic surgery resident at the University of North Carolina, presented findings from studies evaluating the RALRC learning curve and its perioperative costs relative to open surgery. The project was led by Dr. Smith and senior author Raj S. Pruthi, MD.Characterization of the learning curve was based on a retrospective review of data from the initial 100 cases. All of the surgeries were performed by one or two attending surgeons adept at robotic prostatectomy, and a chief resident participated in all cases. Operative, pathologic,and perioperative outcomes were analyzed with the 100 cases divided into five quintiles and using regression models to control for baseline and surgical features reflecting thedifficulty of the case. 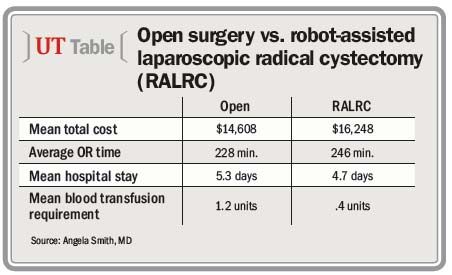 There were no cases of positive margins across the entire series or significant changes in lymph node retrieval rate over time, and the researchers concluded that RALRC is a teachable, learnable technique.

Learning curve shows improvement
"Studies of robotic prostatectomy showed a learning curve for achieving negative margins," said Dr. Smith. "However, positive margins, even in the early learning curve, are unacceptable with surgery for bladder cancer because itis such an unforgiving disease. Therefore, it was reassuring to find no learning curve in terms of margin status.

"However, oncologic control remains the most important measure of surgical success, and so it will be important to continue to follow patients to determine cancerrelatedmorbidity and especially mortality after RALRC," sheadded.

The patient demographic and baseline data provided evidence that the surgeons took on more difficult cases as they gained experience with the procedure. Mean patient age, body mass index, and American Society of Anesthesiologists score increased across the quintiles, the proportion of females operated on increased over time, and eventually conduit diversion was performed using an intracorporeal technique.

Analyses of operative outcomes reflected successful progression along the learning curve and the increase in case complexity. Estimated blood loss decreased across the quintiles and so did operative time, although it increased slightly in the last quintile consistent with greater use of the intracorporeal approach for conduit diversion. A similar pattern was seen for the complication rate, while there were no temporal patterns for return of bowel function or length of stay.

Higher OR cost for robotic procedure
The comparative cost analysis was based on data from 20 cases in each procedure group selected from cohorts of 100 cases performed since January 2006. Cost data were includedfor fixed and variable OR costs along with the hospital cost per day and transfusion cost. Costs for managing perioperative complications were not included since a previous study found this outcome was similar for the open and robotic procedures, Dr. Smith noted.

The mean total costs for the robotic and open procedures were $16,248 and $14,608, respectively. Compared with the open procedure, robotic cystectomy carried a $1,600 higher OR fixed cost and $500 higher OR variable cost, but was associated with a $500 lower hospital cost.

The higher OR fixed cost for RALRC was driven primarily by the cost for the robot and its maintenance, and its higher variable cost reflected a longer average OR time compared with the open procedure (228 vs. 246 minutes). The lower hospital cost for RALRC compared with open surgery resulted from RALRC having a shorter mean hospital stay (4.7 vs. 5.3 days) and lower mean blood transfusion requirement (0.4 vs. 1.2 units), Dr. Smith reported.

However, further analyses extrapolating procedural costs based on a range of OR times (3 to 7 hours) and length of stay (3 to 7 days) suggested that as surgeons progress along the RALRC learning curve and the values of thesevariables decrease, the cost for the less invasive procedure may become more favorable relative to the open procedure. In addition, the cost analysis did not evaluate the potential influence of multiple other factors that can influence cost and help to justify RALRC, including time ofoutpatient convalescence and overall disability, Dr. Smith noted.

"Many studies have shown that there is decreased blood loss, decreased length of stay, and earlier return of bowel function with the robotic technique, and data we've collected on postoperative analgesia use indicate RALRChas a more comfortable postoperative course," she said.

Dr. Smith and her team are continuing to evaluate RALRC via a prospective study in which patients were randomized to the robotic procedure or open surgery.

Innovation is at the cornerstone for care in Cleveland Clinic’s Department of Urology, and it’s enabling experts to deliver more personalized approaches to patients.

“Even though we set some priority areas, we also allow practicing urologists to make suggestions for things that they want to know about,” says Amanda North, MD.

"I am prepared and excited to be fully immersed in the health policy work of the AUA as the 2023 Gallagher Scholar," says Denise Asafu-Adjei, MD, MPH.

Although cases of acute urinary retention and defecation caused by herpes zoster in the sacral area have been reported, no clinical cases about spontaneous bladder rupture have been previously published, according to the authors.