Andrew Bowser is a medical writer based in Brooklyn, New York.

Routine use of positron emission tomography/computed tomography prior to radical cystectomy is unlikely to benefit clinically node-negative patients, results of a recent investigation suggest.

Phoenix-Routine use of positron emission tomography/computed tomography prior to radical cystectomy is unlikely to benefit clinically node-negative patients, results of a recent investigation suggest.

Instead, the primary role of PET/CT appears to be further evaluation of enlarged nodes identified by CT, according to the study authors, who looked at the diagnostic properties of PET/CT in more than 200 patients with muscle-invasive urothelial carcinoma.

Based on the findings, PET/CT should be used when its results would impact patient management, such as the patient with clinically positive lymph nodes that would benefit from further characterization, according to first author Shawn Dason, MD, a urologic oncology fellow at Memorial Sloan Kettering Cancer Center, New York.

Also see: The expanding role of immunotherapy in urologic cancers

“We are seeing PET/CT being increasingly performed as a routine preoperative test before radical cystectomy, but this is unlikely to benefit most patients without a suspicious CT scan,” Dr. Dason said in an interview with Urology Times.

The study, presented at the 2018 Society of Urologic Oncology annual meeting in Phoenix by co-author Nathan C. Wong, MD, also a urologic oncology fellow at Memorial Sloan Kettering, included 208 patients with muscle-invasive urothelial carcinoma who underwent routine preoperative PET/CT and pelvic lymph node dissection at that institution between 2012 and 2017. That cohort included 170 patients with clinically node-negative disease and 38 with clinically node-positive disease.

Based on the present study’s findings, PET/CT is no longer routinely performed at the institution in patients with a regular CT scan demonstrating no suspicion of lymph node or distant metastases, according to Dr. Dason, who worked on the study with Bernard H. Bochner, MD, and colleagues.

Specifically, PET/CT rarely detected pathologically node-positive disease, with a sensitivity of 7% to 23% on a per-patient or per-region level and regardless of chemotherapy status, according to the findings.

By contrast, a negative PET/CT was useful in ruling out positive lymph node disease, according to investigators, with a sensitivity of 92% to 100% and a specificity of 63% to 81%.

That suggests PET/CT can help eliminate uncertainty as to whether patients with small but enlarged nodes truly have actual lymph node metastases, according to the investigators.

“These patients could have a biopsy, but this is invasive, and some of these lesions are difficult to biopsy,” said Dr. Dason.

These findings corroborate results of an earlier study in a more advanced setting. That study, published in 2010 by investigators at Memorial Sloan Kettering and Weill Medical College of Cornell University, suggested that a negative PET/CT result was helpful in ruling out metastatic involvement of a suspicious lesion on CT scan (J Clin Oncol 2010; 28:3973-8).

The benefit of routine preoperative PET/CT in earlier disease was unclear based on the results of earlier investigations, according to Dr. Dason. Those studies included heterogeneous patient populations and varied in terms of how they handled preoperative chemotherapy and clinically suspicious lymph nodes on a regular CT scan. 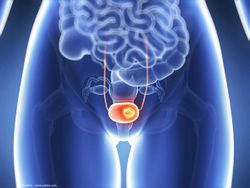