Peyronie’s disease (PD) is surgically treated by a minority of urologists, and urologists who subspecialize in andrology perform a disproportionate number of procedures to treat the condition. Those were among the findings of a case-log analysis that was presented at the 2015 AUA annual meeting in New Orleans and subsequently published in Urology (2016; 87:205-9).

Chicago-Peyronie’s disease (PD) is surgically treated by a minority of urologists, and urologists who subspecialize in andrology perform a disproportionate number of procedures to treat the condition.

Those were among the findings of a case log analysis that was presented at the 2015 AUA annual meeting in New Orleans and subsequently published in Urology (2016; 87:205-9).

Dr. OberlinDespite Peyronie’s disease being a common condition (affecting an estimated 3% to 9% of men), there is a relative absence of evidence-based outcome studies of PD, impeding the development of treatment pathways regarding its management, until recently with the introduction of the new AUA guidelines, said first author Daniel T. Oberlin, MD, urology resident at Northwestern University Feinberg School of Medicine, Chicago. As a result, practice patterns regarding Peyronie’s disease treatment vary widely.

Dr. Oberlin and his co-authors sought to review contemporary surgical trends in the treatment of Peyronie’s, looking at changes in practice patterns, surgeon-specific characteristics, treatment selection, practice characteristics and geography, and specialty training. For their review, they utilized American Board of Urology case logs from 2004-2013. Cases were identified using CPT codes 54200 (Injection procedure for Peyronie’s disease); 54110, 54111, and 54112 (Excision of plaque [and grafting]); and 54360 (Correction of angulation without plaque excision [plication]). Penile prosthesis surgery was excluded from review.

The logs encompassed a total of 6,564 urologists. The authors found that 8,195 surgical procedures were recorded for the treatment of Peyronie’s disease over the 10-year period reviewed.

“We found that the frequency of plaque injection increased annually, from 499 procedures in 2004 to almost double that in 2013, whereas the rate of surgical correction remained fairly stable,” reported Dr. Oberlin, who worked on the study with Christopher M. Gonzalez, MD, MBA, and co-authors. Injection therapy accounted for 82% of all procedures, which Dr. Oberlin said was unexpected because “prior to 2013, few studies found a significant benefit to injection therapies. Of note, all cases were performed prior to the introduction of collagenase clostridium histolyticum (Xiaflex), the first FDA-approved injectable for the treatment of PD."

Next: 313% increase in the performance of plication compared to plaque excision and grafting

Commenting on his group’s findings, Dr. Oberlin said, “With the introduction of the AUA guidelines on the treatment of Peyronie’s disease, urologists now have access to an excellent framework for the standardized evaluation and treatment for PD not previously available.”

“In our study, we found a minority of urologists are performing surgery for PD, and this coincides with previous reports that many urologists may manage PD conservatively or refer patients to urology colleagues who specialize in its treatment. This was demonstrated by the finding that urologists who subspecialized in andrology perform a disproportionate number of these procedures, and we hypothesize that many urologists may prefer only medical treatment approaches, or refer their patients to a urologist who treats PD more commonly,” Dr. Oberlin said.

One of Dr. Oberlin’s co-authors is a consultant for American Medical Systems, Coloplast, and GlaxoSmithKline. 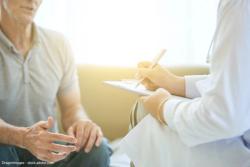