"There appears to be a strikingly high likelihood of increased morbidity and poor outcomes in patient who are not receiving definitive therapy," writes Badar M. Mian, MD.

Bladder cancer is a disease of the elderly, with an average age at diagnosis of 73 years. The advanced age and significant comorbidities, which are often noted in patients with muscle-invasive bladder cancer (MIBC), can render some patients ineligible for curative therapy. In a new study, Westergren et al report that patients with MIBC who are not treated with curative intent require multiple hospitalizations and procedures related to bladder cancer in their last year of life (J Urol, May 30, 2019 [Epub ahead of print]).

To study the natural history of patients with invasive bladder cancer whose initial management did not include any treatment with curative intent (eg, radical cystectomy or chemoradiation), the authors analyzed the data captured in several Swedish national databases and registries. Between 1997 and 2014, they identified 9,811 patients with MIBC. Of these, 5,592 patients (57%) were initially managed without curative intent; ie, they were not treated with radical cystectomy or radiation therapy. In this study cohort, 68% were men and 32% were women.

Also by Dr. Mian: Renal mass biopsy safe, but when is it necessary?

Charlson comorbidity index was 0 or 1 in 68% of patients.

With a median age at diagnosis of 80 years, 55% of men and 62% of women with MIBC in this cohort did not receive initial treatment with curative intent. An average of 2.1 hospital admissions for 18.8 days per patient were recorded during the first year after diagnosis.

Within 1 year of diagnosis, 63% of these patients with MIBC who did not receive curative treatment had died. The median overall survival was 8 months.

On multivariable analysis, tumor stage at diagnosis, older age, increased comorbidity, later year of diagnosis, and female gender increased the risk of death. The cancer-specific survival was 11 months (12 months for men; 9 months for women). Bladder cancer was recorded as the cause of death in 63% of cases.

When analyzing trends over the 18-year study period, increasing age was noted in more recent years in the organ-confined group, as well as lower T stage and increasing Charlson comorbidity index. The overall survival and the cancer-specific survival did not improve during the study period in this cohort of MIBC patients receiving treatment without curative intent.

There appears to be a strikingly high likelihood of increased morbidity and poor outcomes in patient who are not receiving definitive therapy. Most patients who were deemed unfit for curative treatment still required two to three surgical interventions requiring anesthesia and/or multiple hospitalization and often died within the first year.

It’s possible that some of the results reported here are reflective of the practice patterns unique to the Swedish national health care system. While some of the patients deemed unsuitable for radical cystectomy received radiation therapy, chemotherapy and trimodal therapy was not offered.

Also, currently available checkpoint inhibitors that can improve survival were not available during the study period. The use of registries and administrative data introduces the usual confounders and limitations, including the lack of documentation as to why the curative treatment such as cystectomy was not performed.

Regardless, MIBC treated with less invasive therapies is associated with significant cancer-related morbidity and mortality within the first year. This report provides useful information about the short and complicated natural history of MIBC. Despite older age or other comorbidities, patients with untreated MIBC will typically die of progressive bladder cancer.

This information will allow us to properly counsel patients and their families to set realistic expectations during what may be their final year of life.

Dr. Bishoy M. Faltas on the role of genomic testing in bladder cancer 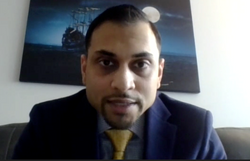