Instillation of electromotive mitomycin-C, which is not approved in the U.S., is based on its potential to eliminate malignant cells that escape BCG immunologic surveillance, said Savino Mauro Di Stasi, MD, PhD, of the department of surgery/urology at Tor Vergata University, Rome.

The timing schedule and delivery techniques were selected to “keep the benefits of both drugs at an optimum,” according to Dr. Di Stasi, who presented the findings at the 2012 American Society of Clinical Oncology annual meeting in Chicago.

Over a median follow-up of 121 months, the median disease-free interval was 79 months in patients assigned to sequential BCG and electromotive mitomycin compared with 26 months in those assigned to BCG alone, for a between-group difference of 53 months (p=.0002).

The enhanced anticancer effect of sequential BCG and electromotive mitomycin may stem from increased permeability of bladder mucosa caused by BCG-induced inflammation, allowing mitomycin-C to reach its target tissue more easily, according to Dr. Di Stasi.

The most frequent adverse events in patients who received at least one intravesical treatment in those assigned to BCG and electromotive mitomycin versus BCG alone were visible hematuria (59.8% vs. 58.1%), dysuria (50.5% vs. 48.6%), and drug-induced cystitis (45.8% vs. 43.8%). Adverse effects required termination of treatment in only about 3% in each group and temporary suspension in about one-third of patients in each group. 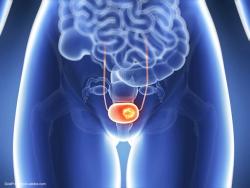 Biomarkers may be predictive of patient response to bladder cancer treatments