On February 26, a 56-year-old man presented to the emergency department (ED) with a chief complaint of fever, chills, and body aches for 2 days. His prior medical history was positive for a urethral stricture, for which he began receiving treatment when he was aged 24 years. Prior to this ED visit, the patient underwent several procedures to dilate his urethra and had been seen in the ED on numerous occasions for urinary tract infections. Several attempts were made in the ED by the nursing staff to catheterize the patient, without success. The patient was given intravenous fluid and voided; however, he began to demonstrate tachycardia and hypotension.

Five days later, the patient was seen by a urologist, with complaints of hematuria and difficulty voiding. He reported a recent injury to his urethra from the ED visit on February 26. The urologist attempted to perform a cystoscopy in hopes of examining and dilating the urethra. However, he was unable to successfully pass the scope beyond the stricture due to the presence of multiple false passages.

The urologist opted to take the patient to the operating room and insert a suprapubic catheter to be kept in place as long as necessary to allow for decreased swelling and healing of the urethra, which was 7 months.

According to the patient, the attending physician negligently failed to request a consult with a urologist during his hospital stay and failed to refer him for an emergent urology consult on discharge. Had he done so, the patient claimed he would not have needed the suprapubic catheter that stayed in place for 7 months.

The patient’s expert internist opined that the attending physician fell below the standard of care due to his failure to be aware of the nature and extent of the urethral injury suffered at the time the patient was admitted to the hospital. The expert testified that the attending physician negligently failed to perform a genitourinary examination of the patient at any time during his stay, negligently failed to request a consult with a urologist while the patient was at the hospital, and did not refer the patient to a urologist at discharge. The patient’s expert further testified that had a urologist been consulted, additional attempts at placing a Foley catheter using a guide wire would have been made in effort to relieve urinary retention and avoid the need for the suprapubic catheter.

Defense counsel for the attending physician argued that his client met the standard of care and that nothing he did or failed to do caused the patient’s injury. The defense expert testified that prior to the patient’s discharge, the attending physician ordered a renal ultrasound and another set of blood and urine cultures. The renal ultrasound revealed a distended bladder with an irregular posterior bladder wall. In addition to the orders for laboratory studies, the attending physician adjusted antibiotic therapy. During the next 3 days, the patient responded well to the antibiotic therapy, and his white blood cell count gradually returned to normal. The defense expert further testified that the attending physician complied with the standard of care. He testified that the primary reason for hospital admission was a life-threatening urinary tract infection that was adequately treated and that the standard of care did not require a urology consult under the circumstances because any further attempts at catheterization would have been contraindicative due to the patient’s serious infection.

The defense’s urologist opined that the patient had a chronic problem with a urethral stricture and noted that the natural history of chronic strictures involves recurrent procedures designed to dilate the stricture and, at times, require placement of a suprapubic catheter to allow inflammation around the stricture to resolve.

After a 7-day trial and jury deliberations of nearly 2 days, the jury returned a verdict 10-2 for the plaintiff on negligence and 12-0 for the defense on causation. 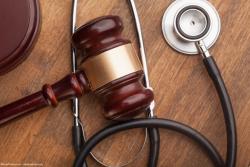