This quiz focuses on a 40-year-old female who presents with a history of right flank pain and first urinary tract infection (UTI). After treatment of the UTI, she noted her right flank pain continued.

A 40-year-old female presents with a history of right flank pain and first urinary tract infection (UTI). After treatment of the UTI, she noted her right flank pain continued. Furthermore, she remembered that her flank pain was on/off for several years. The pain is not related to menses or intercourse. There is no gross or microscopic hematuria. She was athletic and also noted that abdominal crunches exacerbated the pain.

A computed tomography scan was performed (figure 1a), which showed a slightly dilated right ureteropelvic junction (UPJ) and a dilated upper pole with kinking of the proximal ureter at the level of a crossing gonadal vein. The kinking of the ureter can also be seen in the scout film taken during the 10-minute delayed contrast phase while patient was prone (figure 1b). What is the best diagnosis that can explain the patient’s symptoms?

Continue to the next page for the answer.

Nephroptosis has been defined as a renal descent of two vertebral bodies (or >5 cm) during positional change from supine to upright. High clinical suspicion for this rare phenomenon should be ascribed to young female patients with low body mass index and chronic right flank pain. Theories as to the origin of pain have been related to intermittent ureteric obstruction or forceful traction on the vascular pedicle leading to renal ischemia from lack of supportive perirenal fat. In this case, the renal descent caused intermittent obstruction at the level of the proximal ureter.

An intravenous pyelogram (IVP) performed in the supine (figure 2a) and upright (figure 2b) position is shown. There was a descent of 5.5 cm noted. The left kidney was mobile as well, but she was asymptomatic on that side, and descent was only one vertebral body. By performing a right nephropexy, the ureter can drain in both upright and supine positions without being kinked or obstructed by the gonadal vein.

The patient went on to have a robotic right nephropexy using sutures for a 3 point-fixation to the posterior abdominal wall, which resolved her symptoms. Repeat IVP 3 months later showed resolution of right nephroptosis without kinking of the ureter when upright.

Pelvic congestion syndrome would typically result in engorged or congested veins around the ovaries with pelvic pain. The caliber of the gonadal vein in this particular case appears normal. The problem is at the level of the proximal ureter when the kidney descends and not at the level of the UPJ and therefore UPJ obstruction alone cannot explain all her symptoms. Loin pain hematuria syndrome is a diagnosis of exclusion and requires hematuria to be present, which this patient did not have. 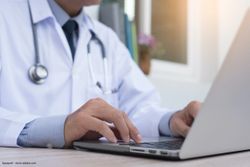