A slow breathing technique guided by an iOS application was able to reduce the occurrence of vasomotor symptoms in a small study of prostate cancer survivors treated with androgen deprivation therapy.

San Diego-A slow breathing technique guided by an iOS application was able to reduce the occurrence of vasomotor symptoms in a small study of prostate cancer survivors treated with androgen deprivation therapy (ADT).

The program was easy to use and acceptable to patients, and its use over a course of 9 weeks was associated with a significant 35% decline in the occurrence of hot flashes, said first author Michael A. Diefenbach, PhD, at the AUA annual meeting in San Diego.

Significant side effects of ADT include loss of libido, loss of muscle mass, and vasomotor symptoms that are associated with sleep and mood disturbances and significant decline in quality of life. Up to 50% of men report vasomotor symptoms severe enough to require treatment, but pharmacologic approaches themselves are associated with side effects and might interfere with cancer control.

“We have adopted a slow breathing exercise that we found in the literature to work with menopausal women who are suffering from these vasomotor symptoms,” he said.

Next: Feasibility evaluated in 27 men

The feasibility and efficacy of the aforementioned breathing technique, guided by an iPhone-based software interface, was evaluated in 27 men, 24 of whom were African-American. All were instructed in the use of a slow abdominal breathing exercise, similar to yoga breathing, and the use of the 2breathe application.

The program is simple to use, Dr. Diefenbach said. For the purpose of this study, patients were given an iPod Touch with software loaded that they were instructed to use if they felt a hot flash coming on. In one of the exercises, patients time their breathing with the opening and closing of a flower in a 6-second rhythm (inhale for 6 seconds, exhale for 6 seconds), for a total of five breaths per minute. From the app, patient could choose other synchronous breathing exercises. They were instructed to continue the activity for the duration of the hot flash.

Using a 5-point scale, 58% of the patients said the app was extremely easy to use and 42% indicated it was quite easy. Ninety-two percent found the breathing exercise to be quite a bit to extremely easy, and 92% indicated that they used the program sometimes to always when experiencing a hot flash.

Patients reported use of the exercise 3.5 times/day, which was consistent over the study period.

At 3 weeks, 58% rated the breathing exercise as “moderately” to “extremely” helpful in reducing the number of hot flashes, which improved to 72% by 9 weeks. Similarly, at 3 weeks, 75% indicated that the program moderately to extremely reduced the severity of hot flashes, and 72% gave the same rating at 9 weeks.

“The next steps are to look at mechanisms-why this actually works-and also to use a randomized controlled trial to test the efficacy,” Dr. Diefenbach said.

No link between PDE-5 use, prostate Ca recurrence 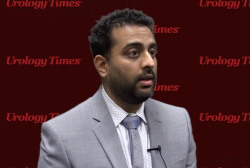