Surgery for incontinence: The pendulum has swung

Over the course of a decade, the therapeutic pendulum in treating urinary incontinence in women swung dramatically from needle suspension and anterior urethropexy to collagen injections and back again to suspension procedures with no sound clinical trials driving the move to either approach. 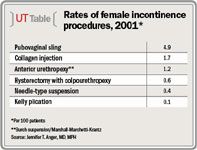 "This study basically shows that there can be huge shifts in the management of a disease without the support of level 1 data," lead author Jennifer T. Anger, MD, MPH, assistant professor of urology at UCLA's David Geffen School of Medicine, told Urology Times.

Analysis of data from the Centers for Medicare & Medicaid Services found that the rate of collagen injections for female urinary incontinence went from zero in 1992 to 3.7 per 100 patients between 1995 and 1998, then dropped to 1.7 per 100 in 2001, the latest year of data in the study.

Dr. Anger noted that the reason for the rise and fall of collagen use and the subsequent rise of sling procedures has yet to be determined by methodologic studies, leaving the explanation for the flux to an educated guess. She suggested that the rise in collagen usage was prompted by a desire for minimally invasive, less-expensive procedures, and that the decline in use of the injections was caused by questions about their long-term efficacy.

"One of the messages that can be derived from this study is that as physicians, we are continually searching for better efficacy, lower morbidity, and less-invasive approaches to incontinence," she said.

Most common procedures in 2001

In 2001, the rates of procedures per 100 patients, from the most common to the least common, were pubovaginal sling (4.9), collagen injection (1.7), anterior urethropexy (Burch suspension/Marshall-Marchetti-Krantz [MMK] procedure: 1.2 per 100), hysterectomy with colpourethropexy (Burch/MMK: 0.6), needle-type suspension (0.04), and Kelly plication (0.1 per 100).

Data in the study were drawn from the Urologic Diseases in America Project, a 6-year initiative conducted under the aegis of the National Institute of Diabetes and Digestive and Kidney Diseases, and were not sufficiently detailed to determine which of a number of sling placement procedures were gaining ascendancy.

Dr. Anger called attention to an earlier study conducted by a co-author, Michael E. Albo, MD, which showed that 2 years after surgery, 47% of patients receiving slings reported success compared to 38% of those who underwent the Burch procedure. Success rates were higher in women presenting with stress incontinence: 66% of those with slings reported success compared to 49% of Burch patients.

"But we don't know, based on our study, which type of sling-cadaveric fasciculata, autologous fascia, synthetic slings-is becoming the most common. The trend seems to be leaning toward an abandonment of the more invasive procedures, such as bladder neck slings, toward the minimally invasive synthetic slings," Dr. Anger said.

Lerapolturev will be given via intravesicular instillation to adult patients with recurrent NMIBC intended for transurethral resection of bladder tumor (TURBT) or cystectomy.