Transitional zone sampling might not be necessary for prostate cancer detection in men with exclusively peripheral prostate cancer–suspicious lesions on multiparametric magnetic resonance imaging (mpMRI) who undergo targeted and systematic prostate biopsies, according to a study published in the Journal of Urology.1

The authors defined clinically significant prostate cancer as a Gleason score of more than or equal to 3+4.

“This zone-dependent biopsy strategy warrants prospective evaluation to optimize the extent of systematic biopsies in presence of suspicious mpMRI lesions,” the authors wrote.

Michael S. Cookson, MD, professor and chairman of the Department of Urology at the University of Oklahoma Health Sciences Center, and co–editor-in-chief of Urology Times, said in an interview with Urology Times that there is debate about how extensive and how many biopsies need to be obtained in the era of mpMRI.

“When lesions are easily visible on MRI, particularly Prostate Imaging-Reporting and Data System [PI-RADS] 4 and 5 lesions, the cancer diagnosis is almost always found in the target,” said Cookson, who is not an author on the paper. “There are, however, questions about the additional information gain from systematic biopsies. In this retrospective study in patients with peripheral zone target lesions, there did not appear to be any significant yield to routine sampling of the transitional zone.”

The study is important because each biopsy adds to the potential morbidity of the procedure, including bleeding infection and urinary retention, according to Cookson.

“The transition zone is an area that is particularly susceptible to urinary bleeding and outlet obstruction, so avoidance of this at least has the potential to reduce the risk of this post-biopsy complication. In addition, transition zone–only tumors are relatively rare, and in the absence of any demonstrable suspicion on mpMRI could probably be avoided,” Cookson said.

While not addressed in this paper, future analyses should look at the potential for reducing complications by avoiding transition zone biopsies in this setting, noted Cookson.

Dr. Morris on how PSMA-PET imaging has “exploded” in the past year 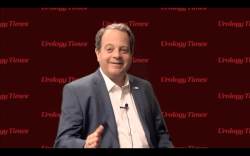