Dr. Goldman on “life-changing” capability of sacral neuromodulation for OAB

In this interview, Howard Goldman, MD, discusses the development of sacral neuromodulation as a treatment for overactive bladder (OAB).

Urology Times® is celebrating its 50th anniversary in 2022. To mark the occasion, we are highlighting 50 of the top innovations and developments that have transformed the field of urology over the past 50 years. In this installment, Howard Goldman, MD, discusses the development of sacral neuromodulation as a treatment for overactive bladder (OAB). Goldman is a professor of urology and vice chair of the Glickman Urologic Institute at Cleveland Clinic.

Please provide an overview of the development of sacral neuromodulation for the treatment of OAB.

Sacral neuromodulation was approved by the FDA in 1997, but it had been under development for 10 to 20 years before that. Back in the 1970s, 80s, and 90s, some of our pioneers in functional urology had been working on electrical stimulation to the sacral roots; those are where some of the nerve transmission to and from the bladder occurs. They were looking at whether with electrical stimulation of those nervesit that could help normalize bladder function. It had very good results, and ultimately, this is something that the company Medtronic got involved with. They ran trials in the early 90s, looking specifically at neuromodulation for overactive bladder, with some very good results. They had trials both in the US and in Europe. As a matter of fact, one of my predecessors at Cleveland Clinic, Steven Siegel [, MD], was one of the clinicians involved in the earliest development, so some of the earliest patients who were trialed on this underwent treatment at Cleveland Clinic. It's amazing; I still see some of those patients who had one of these devices placed in let's say, 1992, who are still coming back every 5-10 years or so to have the battery of the device changed.

How has sacral neuromodulation improved the treatment of OAB?

It's changed the treatment of OAB remarkably. Back when I was a fellow, which was in 1997, right when sacral neuromodulation was introduced, prior to the introduction of sacral neuromodulation, the only things we had were pelvic floor exercises and medication for these sorts of OAB problems. Occasionally, we would do a bladder augmentation, but those are very big operations, and in the patients who didn't have neurologic disease, they didn't always work that well. So there were a lot of patients who really just suffered. Medications helped some, but particularly the medications that were available back then had a lot of side effects. It was a matter of either having a lot of side effects with medicine that didn't work that great or wetting your pants and wearing diapers. I've seen patients in whom sacral neuromodulation has been absolutely life changing. It's taken patients who were in thick diapers and made them dry, or at least made them only have to use 1 diaper a day. Some of the most recent studies have shown that in patients who have an average of 5 urge incontinence episodes a day, a third of those patients become completely dry with sacral neuromodulation, and the majority of them have at least 50% to 75% improvement or better. It's just a remarkable improvement. The other thing that's really changed the landscape of our field is the approval of botulinum toxin, which works completely differently, but has the potential to give the same kind of efficacy. In addition, sacral neuromodulation is also used for patients with idiopathic non-obstructive urinary retention as well as fecal incontinence and has been a major improvement in the treatment of those two conditions.

What future innovations in OAB treatment are you looking forward to over the next several years?

There are a bunch of things. First of all, within sacral neuromodulation itself, there have been some recent innovations in the devices. Number 1, the devices used to have some issues with MRI wherein if somebody had the device, they were limited in the types of MRIs that they could get. With the newer devices for the past year or two, they can pretty much get almost any MRI they need. That's been a big advance. Number 2, about 2 years ago, rechargeable devices were introduced, so instead of having to come back and change the battery every 5 or 6 years, the patient just recharges it once a month or so, and it could last for a long time. More recently, batteries have been introduced that last 10 to 15 years. Those have all been very nice advances. As far as neuromodulation in general, there has been a big push to look for other nerves that feed into these sacral roots. One area that's gotten a lot of play recently is the tibial nerve. People have been stimulating the tibial nerve through an external needle for a long time, and we know that it works. But in the past few years, there are quite a few groups that have looked at implantable tibial nerve stimulators—a very small implant that would go under the skin, or under the fascia right near the nerve. It would have its own little battery that then ran and stimulated the nerve. Alternatively, a small wire can be implanted right near the nerve that does not have a battery. The patient wears a little ankle bracelet, which is where the energy comes from, and it's transmitted through the skin to the device, and then the device stimulates the nerve. There are a number of companies that have looked at that. Some of them have quite good results. I think there's one that's already on the market. There are a few others that will be on the market soon. And then there are a whole bunch of other things that people are looking at for different ways of modulating the nerves to help treat OAB. 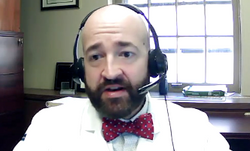 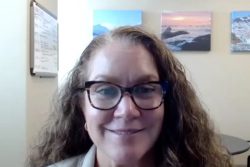